The Minute After: Coppin State 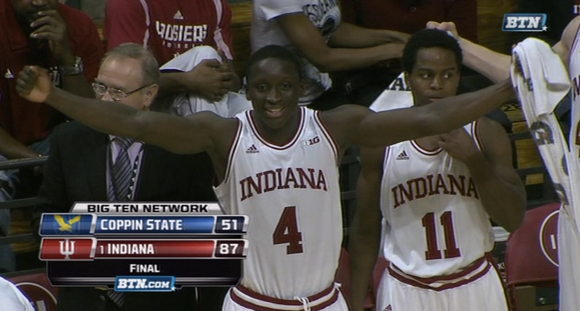 I. The Georgia game had its share of ugliness, but this one — the first ten minutes, at least — wasn’t pretty. Indiana missed shots (a Will Sheehey airball, an 0-9 start) and turned the ball over (eight turnovers in the first 10:35). Coppin State’s 2-3 zone had the Hoosiers out of sorts in the halfcourt and the Eagles didn’t surrender easy buckets in transition.

So if this one was going to ratchet up a notch, if it was going to turn from merely a comfortable lead to blowout territory against a team that was rated as Indiana’s weakest opponent to date, a spark in the second half was needed.

And that came in the form of Victor Oladipo. Indiana played almost exclusively a 1-2-2 three-quarters court press against Coppin State after halftime, and Victor Oladipo was all over the dang place — steals, deflections, tie-ups, forcing guys out of bounds. Indiana starting turning his terrific defense into offense — as this team is so good at doing — and by the time Oladipo was finally able to get a breather at the 12:16 mark, the Hoosiers had punched the lead out to 28 points (59-31). Any thoughts of close one in the second half had been put to rest. He reportedly had 20 deflections tonight, a record in the Tom Crean era.

II. In the first half with Indiana struggling to find success offensively, Cody Zeller only had one — one! — shot attempt. The Hoosiers simply didn’t work the ball to him much, and with them not scoring a ton on the beak, Zeller wasn’t getting any sprint-ahead easy buckets, either. It took until the 9:30 mark of the second half for him to get his second shot attempt — a made lay-up. Zeller did find his way into the offense more after that — which included two strong dunks — to finish with nine points and seven boards.

This really isn’t indicative of much — especially on a night where things were a little off for Indiana. But it was a little reminiscent of Zeller’s first batch of games as a Hoosier last year where he wasn’t getting the touches he should have.

III. Christian Watford looked a bit better this evening to the tune of 10 points (3-of-8), seven rebounds and two steals. Jeff Howard scored four points. He could have had eight had he made both his free throw attempts and made another lay-up he missed.