With four starters 6’8″ or taller, Georgetown presented matchup issues for the Hoosiers in their 82-72 overtime win last Tuesday at the Barclays Center. As such, Indiana went 2-3 zone for long stretches of the game instead of playing man-to-man defense against  John Thompson III’s much larger perimeter players.

While it worked at times, Georgetown was also able to exploit it for a host of 3-pointers, particularly in the first half. The Hoyas went 8-of-14 from distance during the first 20 minutes of action.

A look at four of those first half 3-pointers all coming against Indiana’s 2-3 zone in the latest edition of Film Session:

I. Georgetown passes the ball around the perimeter for the first 10-15 seconds of this possession: 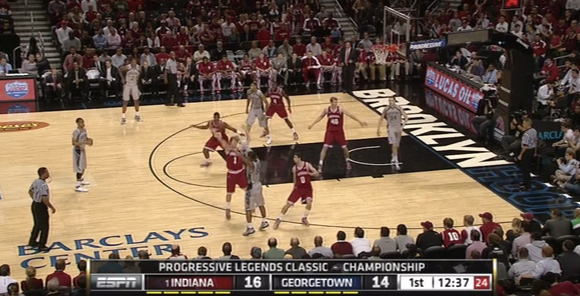 The ball makes it back to Jabril Trawick on the right wing and he dribbles towards Otto Porter, who’s instructing him to pass it up top to Markel Starks: 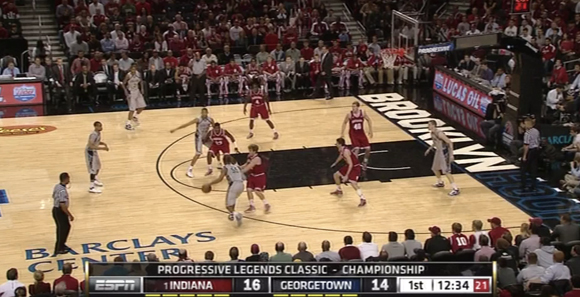 Porter puts a body on Remy Abell as Trawick drew Jordan Hulls to the middle. That leaves Starks with room up top. Trawick passes the ball to him: 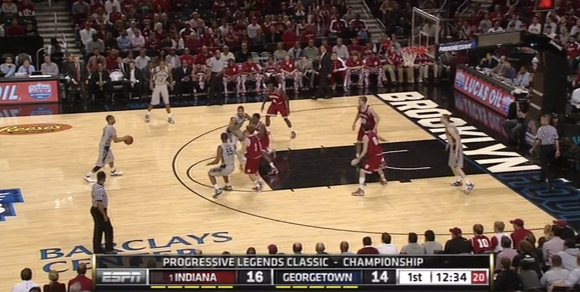 Though he’s several feet behind the line, he has space to rise and fire with ease. He connects: 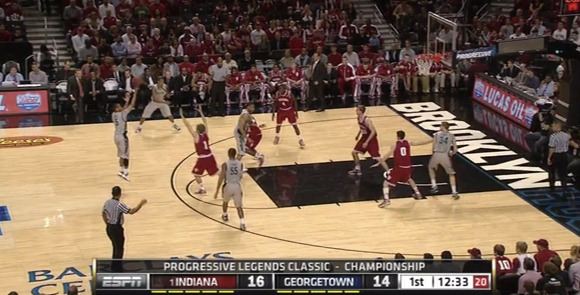 You beat a 2-3 zone by getting the ball into the middle, drawing the defense and finding the open man. This was one way of Georgetown getting that done.

II. Again, Georgetown drains the shot clock a bit here by passing around the perimeter. D’Vauntes Smith Rivera looks over the top: 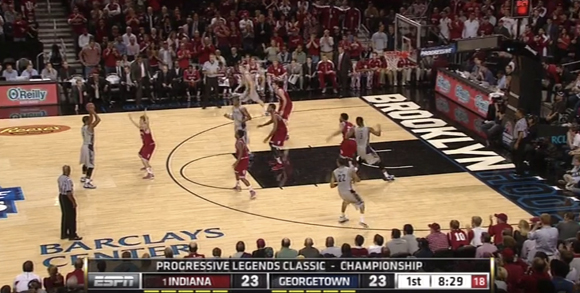 But decides to go over to Porter on the right wing. Porter draws over Yogi Ferrell: 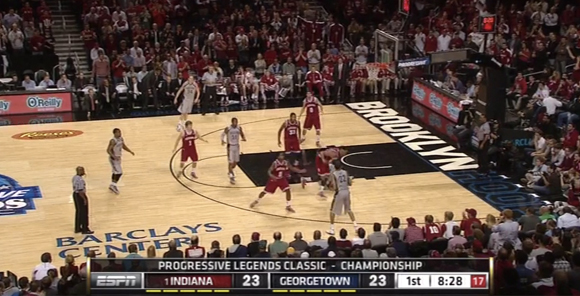 Porter kicks it back up to to Smith-Rivera. He has the option of swinging it around to Nate Lubick on the left wing, but with Hulls under the top of the key he starts to step into a shot: 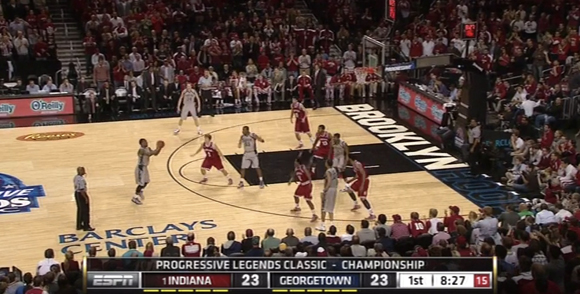 And connects on the trey: 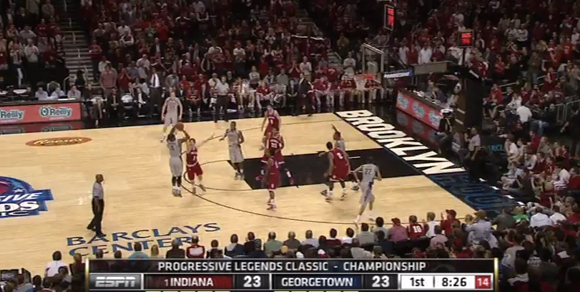 Not bad defense by Hulls per se. But because Georgetown took some of these 3-pointers from a few feet behind the line, there was room here for Smith-Rivera to take the shot. This is what happens when you guard a space/area as opposed to face guarding; the room is there to use.

III. This one starts with a fluke. A Starks pass hits the ref: 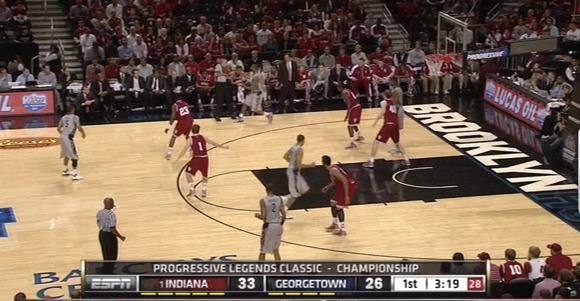 It’s eventually swung over to Greg Whittington on the right wing: 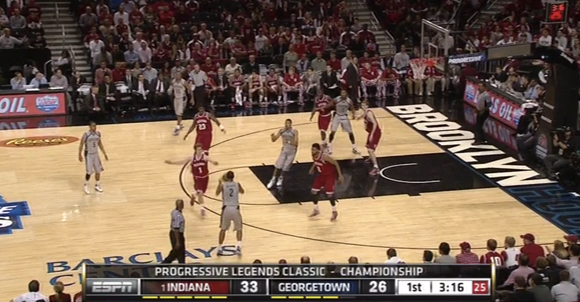 He finds Porter, who was calling for it in the middle: 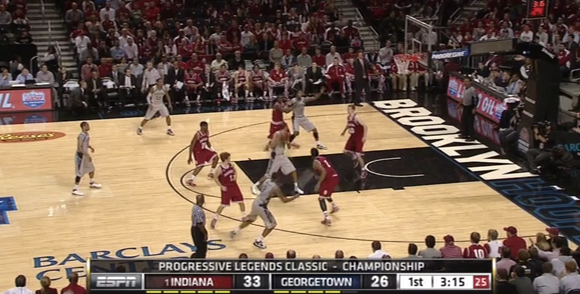 This collapses the zone. All five Hoosiers are at or below the free throw line and three have two feet in the paint: 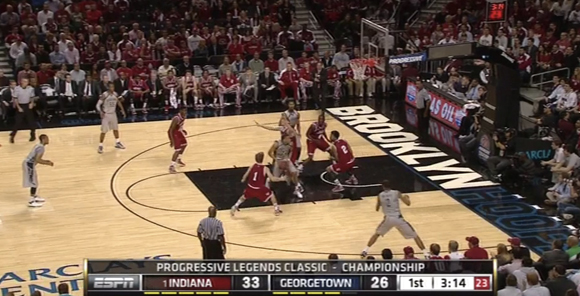 This allows Whittington to slide down to the right corner, receive a pass from Porter and connect: 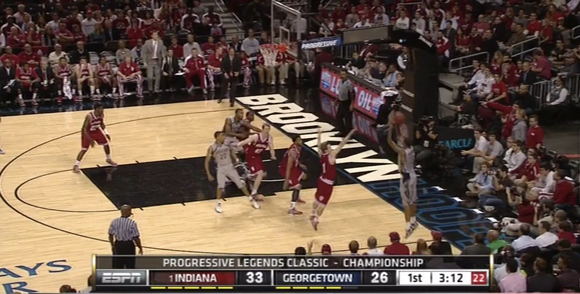 This was a more extreme example of getting the ball into the middle, collapsing the defense and finding the open man.

IV. Porter passes it into Mikael Hopkins, who — you guessed it — is in the middle of Indiana’s 2-3 zone: 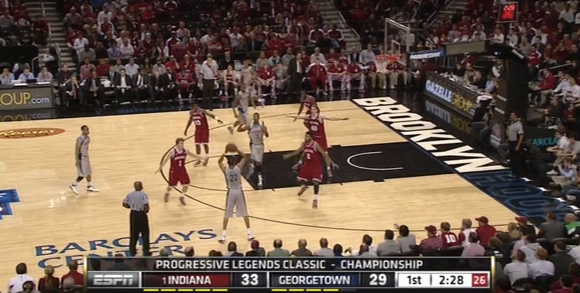 From there it’s a turn to his backside as Abell comes over: 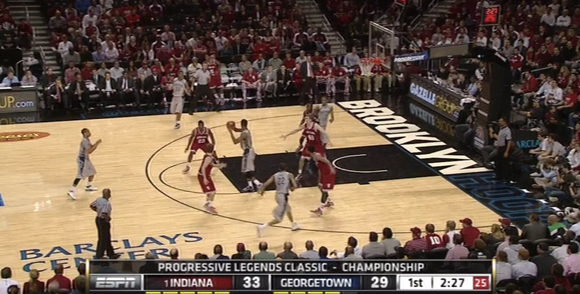 This give Nate Lubick space to catch …: 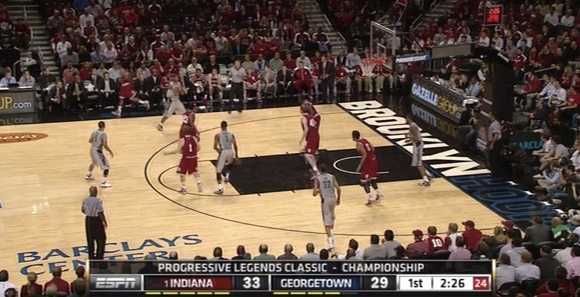 … shoot and hit yet another Georgetown 3-ball: 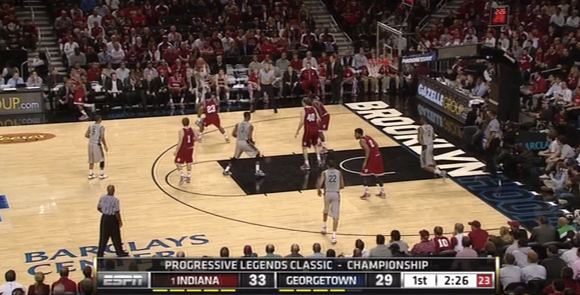