The Minute After: Georgia 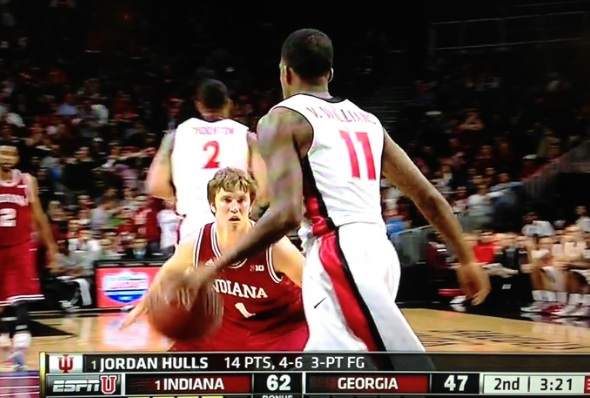 I. Here’s the reality of this one: Yes, it was ugly for the first 30 or so minutes, but Indiana’s final offensive surge to end the game made it respectable. The Hoosiers ended up shooting 51.5% on 2s and after starting out just 1-of-12 on 3-pointers,  four late ones had them at 5-of-16 for the night (31.3%). That adds up to a 50 eFG%. Not great, but after starting just 8-of-25 from the floor in the first half, it was somewhat of a return to center. They also managed 1.03 points per possession, which is a little better than the traditional average output of 1.0 for a college basketball team.

Having said that: This was generally one that was hard to watch. Indiana had spacing and ball movement issues along with the poor shooting, and fouls ran rampant early. Jordan Hulls, Cody Zeller and Victor Oladipo all had two early and Georgia was in the bonus by the 8:06 mark in the first half. The Bulldogs didn’t look much better during the same timeframe, and well, yeah: This game wasn’t one to frame and put up on the wall.

II. Rough one for The Big Handsome. Beyond the early foul trouble — in which he sat the last 9:05 of the first half — Zeller just looked out of sorts. He had as many turnovers as rebounds (four) and scored just six points. Georgia bullied him out of bounds on a double team. He was fouled hard in the second half and took a little bit of time to get up. Zeller also missed back-to-back free throws after that hard foul.

But then there was Jordan Hulls to the rescue: As Andy Bottoms noted, Hulls scored or assisted on 18 of the next 20 Hoosier points after they led 42-40 with 10:21 to go. He hit three 3-pointers and scored on a spin move off the left wing that had the crowd going crazy. The seven other points came on two assists to Victor Oladipo — one of the alley-oop variety — and a Christian Watford 3-pointer. After laying an egg for most of the game offensively, Hulls almost single-handedly moved this from a game that was closer than most expected to one where IU was able to win by double-digits.

Remy Abell also continued his strong start to the season, being one of the few bright spots in the first half — he had six points (2-of-2 from the field, 2-of-2 from the line) in eight minutes of action.

III. It was an incredibly pro-IU crowd here inside the Barclays Center this evening. I think 90% is an accurate guess. Of course, some made the trip via plane, train or automobile. And Indiana is likely to really start traveling well with their rise back to national prominence. But don’t forget that Indiana University has seen a surge of New York/New Jersey/East Coast students in recent years. Couple that with grads/fans that may have matriculated to the most populous city in the states as well post-graduation that may not have grown up in the area — Greg and I both knew people in that category here tonight — and you get a nice, little Hoosier Nation inside the Barclays Center.

Even five minutes into the first half of the UCLA-Georgetown game, the remaining IU faithful even gave a “Hoo-Ho-Hoo-Hoosiers” chant to some of the team as they filed into seats behind the UCLA bench to take in action.