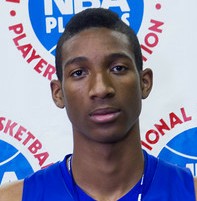 Marcus Lee told Inside the Hall at the Nike Global Challenge that he planned to narrow his list to seven schools “in the next few weeks.”

It appears the fast rising 2013 forward from Antioch, California has settled on his list of seven.

Lee’s performances this spring and summer with California Supreme led to offers from at least 30 schools and he was one of the top shot blockers in Nike’s Elite Youth Basketball League (EYBL).

In addition to participating in the Nike Global Challenge, he was selected for the NBPA Top 100 Camp, the Amar’e Stoudemire Skills Academy and the LeBron James Skills Academy.

The next step in the process for Lee will be to set up his five official visits.