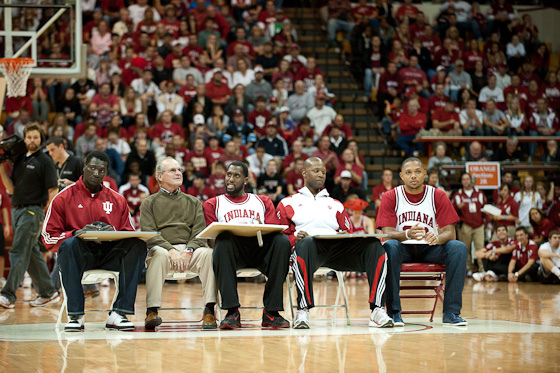 NBA free agency kicked off Sunday and former Indiana guard Eric Gordon has a strong list of suitors according to multiple reports.

Gordon, who was acquired before last season by the New Orleans Hornets, reportedly met with officials from the Indiana Pacers and Houston Rockets on Sunday. The Phoenix Suns are also expected to meet with Gordon later this week.

But these meetings may become a moot point as The Times-Picayune reports that the Hornets are prepared to match any offer for Gordon, who is a restricted free agent:

The Hornets are prepared to match any offer Gordon receives, even if it’s a maximum-money offer. New Orleans is the only team that can offer Gordon a five-year, $79 million contract.

The Rockets appear to be the most serious about obtaining Gordon and could explore the possibility of putting forth a sign-and-trade package that would give the Hornets compensation, so they would be less inclined to match a potential offer.

Gordon, who played in just nine games last season due to a knee injury, is among 16 NBA players still in the mix for the 2012 Olympic team. The announcement of the 12-man roster could come on July 7.

The Times-Picayune report states that Gordon would like to have his situation settled before leaving for USA Basketball training in Las Vegas later this week.

Former Indiana forward D.J. White, who played the last season and a half with the Charlotte Bobcats, may be looking for a new NBA home.

According to The Charlotte Observer, the Bobcats elected to not extend a qualifying offer to White:

The Bobcats did not address power forward DJ White in their announcement, so he apparently did not receive a qualifying offer and becomes an unrestricted free agent.

Not extending a qualifying offer does not keep the Bobcats from making White an offer, if they so choose.

White averaged 6.8 points and 3.6 rebounds per game last season for Charlotte, but the team finished just 7-59.