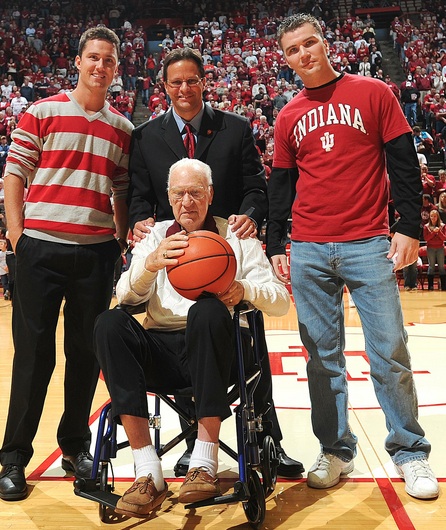 Lou Watson, who played both baseball and basketball at Indiana University and later served as the head basketball coach from 1966-71, passed away on Thursday at the age of 88.

Former Indiana University player and coach Lou Watson passed away, May 24 in Fairfax, Virginia. He was 88.

He was inducted into the IU Athletic Hall of Fame in 1989.

Men’s basketball Coach Tom Crean on Lou Watson
“Lou Watson was a part of so many of the historic moments of Indiana basketball and accomplished so many great things during his Hall of Fame career.  My first meeting with him came at his home in Ellettsville and it was a great afternoon.   It was a tremendous honor to have him visit our Elite Camp in 2009 with so many of the other former greats in attendance that afternoon. To see him return later that year with his family to serve as an honorary captain and to hear that ovation he received when he was introduced, I know it made his heart proud. Those were moments that I will never forget and his picture receiving the game ball with his grandsons has been displayed proudly in our locker room since that day.”

Vice President/Director of Athletics Fred Glass on Lou Watson
“Lou Watson was a true Hall of Fame Hoosier in every sense of the word. His association to the University and the athletic program spanned over five decades first as a standout baseball and basketball player in the late 1940’s and early 1950’s, second as a coach for the men’s basketball program from the 1950’s until the early 1970’s and finally as an administrator for the program until 1987. It was great to see him back in 2009 as an honorary coach. Our thoughts and prayers go out to his family. “