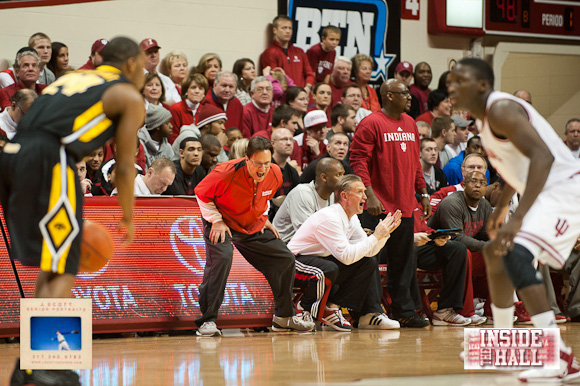 No. 18 Indiana returns to action tonight in a road meeting with the Iowa Hawkeyes. Here’s what the Hoosiers are saying about tonight’s game in Iowa City:

On what IU needs to improve on from the first meeting:

“We know when we get to Iowa, we’ve got to be way better defensively. That’s the bottom line. We allowed them to shoot too high of a percentage. There were times they really earned shots, especially Oglesby, who had people in his face. But there were times we let their team get way to to comfortable in the game, whether it was in the post or on the perimeter. So we’ve got to make sure that we understand that our defensive mindset and our defensive energy, and most importantly, starting with defensive transition, have got to be really really high in that game. I’m sure it will be a fast-paced game, but we can’t be in the situation where we go on the road and try to trade baskets with a high-powered team like Iowa.”

On the last meeting:

“They really did a great job of getting out and running and getting some easy baskets, but our guys continued to respond. We didn’t want to get into a situation where we were trading baskets and there were a couple of times that happened, but overall, it was a solid effort for us.”

On IU in the last meeting:

“We had a very solid game from a lot of people, but the bottom line was that the ball moved. And when the ball moves on offense and when you’re active on defense and we kept understanding the pace of the game, it worked out well for us. I was very excited about the 20 offensive rebounds and the 20 assists.”

On playing Iowa at home:

“I don’t care who it is, it takes a focused, 40-minute effort to win anywhere in this league. There is a toughness about the Big Ten, whether it be the players, coaches or that make each possession of each game critical.”

“Every road game in the Big Ten is a tough test. We have had some success this year on the road and we just have to build on that. We need to try and get the crowd out of the game and rely on our own energy.”

“When you are on the road, I think its important to get some shots to fall down early. I just look to see what the defensive will give us. I do like to be more aggressive (on the road) because I think it can help my teammates as well.”

“Playing on the road is no easy task for sure. We need to be prepared for a dogfight. We have to play a lot better defense than we did last time and not give them easy buckets. We can’t give them any easy touches.”