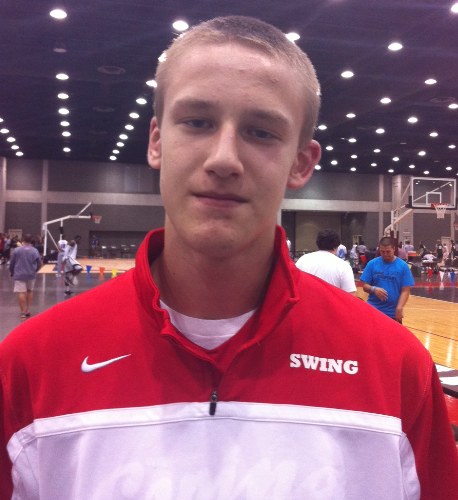 Luke Fischer became the third verbal commitment in IU’s 2013 recruiting class on Saturday night when he gave a verbal pledge to the Hoosiers following their 74-70 win over No. 2 Ohio State.

Inside the Hall caught up with IU’s latest commitment and his father, Jim, on Sunday afternoon to talk about the big decision:

On why he decided to commit to Indiana on Saturday:

“Coming down here, we felt like it could happen, I could make my choice. I just wanted to see what the game atmosphere was like. When we talked with Coach Crean after the game, it just felt like the right thing to do.”

On if he came on the unofficial visit with the mindset that he might commit:

“Yeah, me and my family were talking about it about a week ago where we stand with everything. I kind of told them it might happen and they were behind me on it.”

On his emotions and excitement following his decision to commit:

“It feels great. I’m excited. I kind of want it to come quicker, but I have some business to finish at high school. It also feel like a lot of weight has been lifted off my shoulders. I can just focus on my high school team now. It feels great, it really does.”

On the atmosphere Saturday night in Assembly Hall:

“It’s unlike any other basketball game I’ve ever been to. It’s a great place to play and I can’t wait to play there.”

On the atmosphere in Assembly Hall last night:

“The atmosphere was unbelievable. From the minute we walked in and the crowd wasn’t huge yet, you could just feel the intensity already. The fans are probably the best of the country. We just had a blast last night.”

On how long Luke has followed Tom Crean dating back to the Marquette days and his role in committing to Indiana:

“Obviously he played a huge role. Luke went to his camps in fifth or sixth grade. He’d go down to Marquette, spend a day or a couple days during a camp. Coach Crean remembers him from back then. Not that he’s been following him since then, but he knew who Luke was and when Luke got onto the scene, he started recruiting him. That’s pretty much the history with Crean.”

On how seeing Cody Zeller excel at Indiana played into Luke’s decision and potentially filling that role one day:

“It was a huge part of the decision. Whether or not Luke gets the opportunity to play with him, which I hope he does, that’s exciting. If he ends up, I don’t want to say replacing him because I don’t think he can replace a Cody Zeller, but if Cody decides to stay and Luke can fill in while he’s still there and help out and then Luke can take over, that would be great. I just think Luke is going into a great situation right now. Obviously Indiana’s on the rise and Coach Crean has the team where he wants them to be. We just feel like it’s a great situation.”