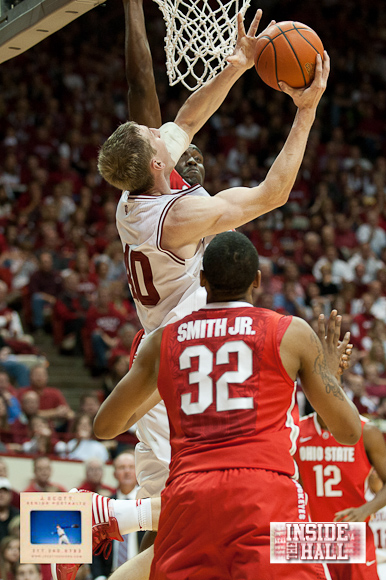 Jared Sullinger might have won the statistical battle with Cody Zeller on Saturday night in Assembly Hall, but it was Indiana who walked off Branch McCracken Court with a 74-70 victory over Ohio State.

Sullinger, the heavy preseason favorite to win the Big Ten Player of the Year, finished with 15 points and nine rebounds, but was limited in the first half with two fouls.

And a big part of that foul trouble was the presence and craftiness of Zeller, who bounced back from what he called a “bad game” on Wednesday at Michigan State.

“He’s a good basketball player. Very creative around the rim. He’s strong,” Sullinger said of IU’s prized freshman. “A lot of freshmen don’t come in strong and ready to play in Big Ten basketball. It’s a very physical conference as you can see today. There was a lot of banging, a lot of physicality down low and even on the perimeter.”

Zeller finished with 14 points and four rebounds before fouling out with 2:24 remaining.

“Give him all of his respect. He played one hell of a game,” Sullinger added.

The decibel levels didn’t measure up to IU’s 73-72 thriller over No. 1 Kentucky on Dec. 10, but the home court advantage of Assembly Hall was still fully in tact.

“They were responsible not only for some baskets, but also for some stops. The building was electric,” Tom Crean said. “The Hoosier Nation is so incredible. To have that kind of energy in the building without the student here obviously due to break was awesome.”

The atmosphere was a factor in the eyes of Sullinger, too, who compared it favorably to “Phog” Allen Fieldhouse in Lawrence, Ks.

“It had the same effect as Kansas,” the Ohio State sophomore said. “Even though I was sitting on the sideline. You walk off the floor, they hang a L on you and your ears are ringing because the fans are so loud. Hoosier Nation was very loud today and they gave a very good home court advantage.”

With Zeller and Tom Pritchard saddled with foul trouble, Derek Elston played 16 pivotal minutes in his second game back following surgery to repair a nose fracture.

“If there was a most improved player of the week award in the Big Ten, I don’t know who would get it besides Derek Elston,” Crean said. “Because he had a tough night the other night. He came back, he knew it and he practiced with an edge the last couple of days.”

Elston, who is wearing a protective mask, scored four points (2-of-6 shooting), pulled down four rebounds and had a block and a steal. He admitted that the adjustment to wearing the mask has been difficult.

“Out there when I shoot [in practice], it’s not too bad,” he said. “But when I’ve got defense on me like that, things happen that when I’m shooting by myself don’t. I’m still trying to get used to it, but I feel like I’m doing a pretty good job.”

Saturday’s win gave the Hoosiers a win of No. 1 and No. 2 in the same season for the first time in program history. Indiana is just the ninth team nationally since the 1996-1997 season to accomplish that feat. … Verdell Jones moved into the No. 28 spot on IU’s all-time scoring list with 14 points. … Christian Watford was honored before the game for joining the 1,000 point club during Wednesday’s game at Michigan State and with his 10 points on Saturday, passed Jared Jeffries for No. 42 on the Hoosiers’ all-time scoring list. … While no injury update was provided on Will Sheehey, the sophomore wing walked around without crutches, but still wearing a boot on his left foot. “We have really missed him the last couple of games. Will is a guy who can guard positions one through five,” Crean said.