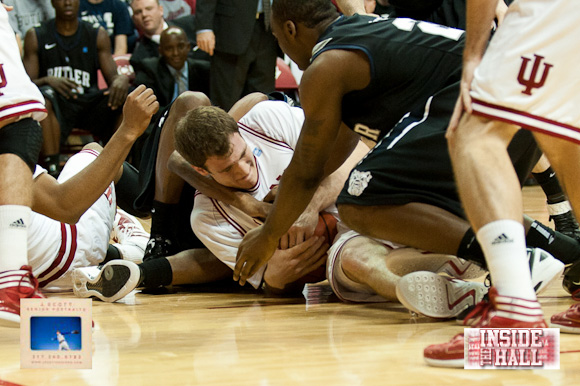 Notes, quotes and observations from Sunday night’s 75-59 win over Butler

But Pritchard, now in a reserve role due to the arrival of Cody Zeller, was a key contributor defensively in the second half.

Pritchard, a three-year starter, is averaging just 9.3 minutes through six games, but is adapting well to his new role, according to Hulls.

“He’s taking it to heart what his role is on this team,” Hulls said. “Just come in, give great minutes and that’s what he did tonight.”

Through six games, Indiana’s free throw rate continues to rank in the top 10 nationally and the difference Sunday night in attempts between the Hoosiers and Butler was significant. Indiana shot 36 free throws to 22 for Butler.

It’s one of the primary changes thus far from a season ago when IU ranked at the bottom of the Big Ten in sending their opponents to the line and didn’t get there frequently enough themselves.

“It’s extremely important. Because good teams, 25 percent or better of your points have gotta come from the foul line,” Crean said. “We’ve never been to that point. And the big thing for us was to cut our fouling down. We’re making progress, but we’ve still got a ways to go with that.”

It’s one of the first statistics Tom Crean talks about in his post-game press conference: deflections.

The Hoosiers recorded 74 on Sunday night with 42 coming in the final twenty minutes.

“I’m truly blown away by our defensive effort,” Crean said. “To have 74 deflections, I’ve never been a part of a team as an assistant or a head coach that’s had that.”

Since it’s not a traditional statistic, Crean was asked to define how he defines the term.

“It’s a charge. For us we count it as a shot clock violation. It’s a tip. I tip it, you grab it, deflection for me, deflection for you,” he said. “It’s a blocked shot, it’s a steal. It’s a loose ball. It’s just not a rebound.”

HOOSIERS CONTAIN HOPKINS AFTER HALF

Butler sophomore guard Chrishawn Hopkins scored a game-high 13 points in the first half.

But Indiana tightened up on Hopkins in the second half and held the Indianapolis native to just one field-goal attempt after the intermission.

“Our length was good, we didn’t lose him,” Crean said of IU’s second half effort on Hopkins. “We didn’t give him uncontested shots. That was really important. I think we just did a better job of staying with him.”

Will Sheehey said Indiana was giving Hopkins too much room to operate in the first half.

“We were giving him too much room where he could jab step or take two dribbles and get the pull-up jump shot,” the IU sophomore said. “We did a lot more switching in the second half. We didn’t really back off that much. We tightened up our defense on the perimeter.”