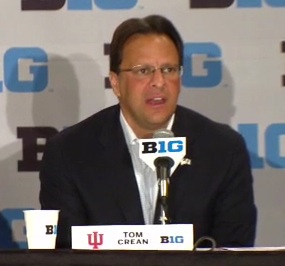 Ryan had a comprehensive post with quotes from Tom Crean’s breakout session at last Thursday’s Big Ten Media Day. But after combing through even more audio, here are some more quotes to pass along from Indiana’s fourth-year coach:

“That’s why Indiana’s so unique. When you look at what’s going on with our fan base, we’ve got more student tickets sold than six of the schools in this league combined right now. That says a lot about Indiana. We led the country last year in attendance for students at 6,100. It had dropped into the high 3’s or low 4’s when we first came. We’re up over 7,600 plus right now for students. That’s not normal. That’s just not normal and I think if we didn’t have such a great fan base, if we didn’t have such a passionate fan base, it’d be a lot harder. It would be a lot harder. And I couldn’t imagine the last few years without (the fans). And people want to win. But I want to win. I mean we left a team that on paper could have competed for a Final Four, national championship at Marquette. If Trevor Mbakwe would have stayed, ask him how good we would have been back there if we would have stayed and he’d have stayed there. But we didn’t. And so you come in, you want to win. You don’t come in to not win. And so you want to feel it. But you really want to feel it for your families, your players and their families and for your fans more than anything else.”

On if it’s fair to coaches rebuilding programs for the NCAA to implement the minimum APR score of 930 for postseason play: “No. And I’d be the first to say I don’t understand the exact formula they want to use right now if it goes to that. But if it’s based on the exact scenario you just said with Indiana there’s no way that’s fair. Because we’ve had (a score of) 1000 and we’re going to have 1000 again now that Guy-Marc Michel has signed a European contract. Here’s what’s wrong with the system: If Guy-Marc was never eligible to play for us, like he wasn’t, he still would have counted against our APR score. I think I’m right on this because we were going to fight for it. And I don’t know if we would have ever won. The fact that he signed a contract overseas allows us not to be penalized. But there’s a flaw in the system when you’re going to be penalized for a guy that the NCAA never was going to allow to play for you.

“With that being said, there’s probably some bugs in the system that would need to be worked out. There’s no way it’s fair to somebody walking in. Our situation was certainly unique, but there’s other unique situations that maybe aren’t as dramatic. That wouldn’t be fair at all. Over a period of time, when you’re judged on the time you’ve been at the program, when you’re judged on your own recruiting classes … It’s like when the graduation rates came out the other day and we were 91 percent from our time at Marquette but yet Indiana was in the low 40’s. Every time I read about the low 40’s, I wasn’t here for that. The average person that looks at that and says Indiana had a 47 percent rate. That wasn’t us. We’re busy graduating our guys with 91 percent. And it’s the same thing. Our APR’s were really high at Marquette. And they’ve been really high since we’ve been here. But we’re digging out of an astronomical APR hole.”

On if conference re-alignment boggles his mind and its potential impact on the Big Ten: “No, not really. I don’t spend much time on it. I get concerned for my friends. And I get concerned because I spent time in the Big East. I hate to see the Big East not be what it was. But we had a coach in 2005 at the league meetings that said in five years we could easily split into a football, non-football league. And he said that back in 2005 and man, he wasn’t that far off the potential of it. And I hope it doesn’t happen. I worry for Marquette. I worry for Louisville. But I mean, if you read the Bible, worry’s a sin and I don’t want to spend a lot of time worrying. I want to spend a lot of time on what we’re doing. I just hope it works out. In three to five years, it’s all going to shake out and it’ll be what it is.”

On whether Indiana can be one of the top defensive teams in the Big Ten this season: “Well I hope so. That’s the goal. One thing I look at every week, J.D. (Campbell) pulls it up every week … the turnover-takeaway margin in the NFL. You’re rarely going to find a team that’s not winning a bunch of games that’s in the top of that ladder. And you’re rarely going to find a team that’s winning a lot of games that’s on the bottom. It’s the same in college football. Point differential and turnover-takeaway type mentalities, points off turnovers in sports, you can look at a BCS program in football, a BCS program in basketball, a Division II football, a Division II in basketball, those things carry over. Some don’t carry, those carry.

“And so for us to be a better defensive team, we’ve got to take care of the ball better on offense, we’ve got to create more opportunities off the defense. We’ve gotta capitalize off the opportunities. Because that’s what it’s all about. Why play so hard if you’re not going to get the ball back? You know what I mean? You play Wisconsin for 35 seconds … one reason they’re so good is at the end of the shot clock they’re going to make shots. It just deflates you and they know it. So let’s keep trying to turn the game up the best way possible. Get on the break and play, see what happens. That’s why you play defense, you play defense to get it back. So the more you’re doing it without gambling, without taking chances in a team concept, the better we can be. But certainly athleticism, how many dribbles you can guard, that’s what separates guys as individual defenders. Short space quickness, how much ground you can cover, that’s what separates anybody from being a good defender because there’s just hundreds and hundreds of opportunities in a game where you’ve gotta be quick in a short space and for a short period of time. If you’re slow, that’s where fouls come, people get to the rim. That’s what the game all comes down to. It’s the same thing in football I think. It’s the same thing in baseball. The rangy shortstop is a lot better than the guy that can’t get his knees bent. That’s what it is, short space movement.”