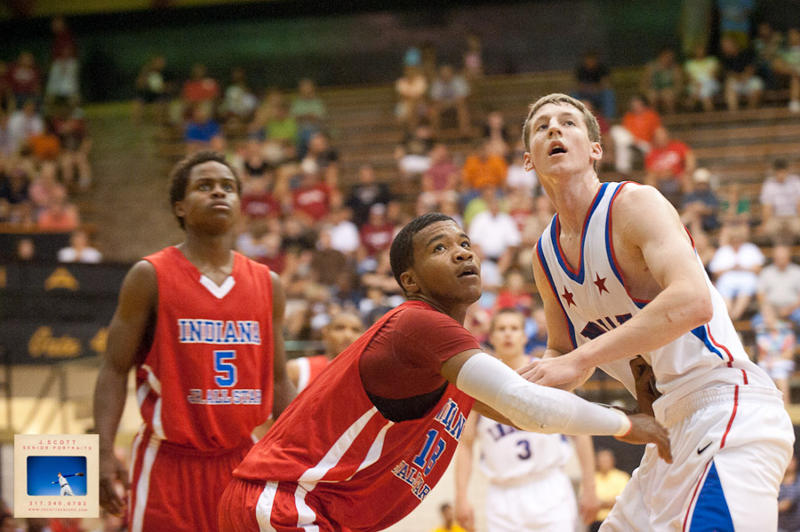 2012 Lawrence Central forward and Indiana commitment Jeremy Hollowell took an unofficial visit to Bloomington for Hoosier Hysteria and spoke to Inside the Hall on Monday night about his experience and several other topics. A transcript of our Q & A follows:

“It was real fun just being there and witnessing the atmosphere in the place and how much the fans came out to support. And knowing that next year I’ll be suiting up with the guys I’m coming in with, it’s just a real good feeling. It makes me kind of nervous for a little bit when you think about it knowing how close it’s coming, but it was a real fun experience.”

On how the atmosphere for this year’s Hysteria compared to previous years he attended:

“I think it’s pretty big every year. I think this year the thing that stood out to me was how Cody (Zeller) and Austin (Etherington) are really there now. Seeing them grow up and play AAU and all that, it’s pretty crazy to see them actually a part of it now.”

On Victor Oladipo’s performance of Usher’s “U Got it Bad”:

On when he’ll take his official visit:

“I’m taking my official homecoming weekend. Me and Ron (Patterson).”

On his reaction to a comment by Lawrence Central coach, J.R. Shelt, that he can be a top 10 player in the country when he’s focused:

“He’s just trying to get me to play with that killer mentality all the time. I’ve been working on it, going hard every open gym. I think it’s pretty much set in me now, that sense of urgency, knowing it’s my last year and everything. Every time I step on the court I just think about that and it just makes me go hard. I feel like I’ve still got a lot to prove. I feel like playing against people around the country, seeing how they’re supposed to be this or supposed to be that and how I stack up to them, I feel like I’ve just gotta keep pushing and keep working. I believe I can show a little more I guess.”

On time flying by the last few years of his high school career:

“It’s real crazy. It’s just so crazy how I look back at it and stuff like that. Like I said about Cody and Austin, it seems crazy how they really go there (to IU) now. It’s something to look forward to, something to be proud of really though.”