Bill Raftery to host Hysteria, Gordon and White to appear 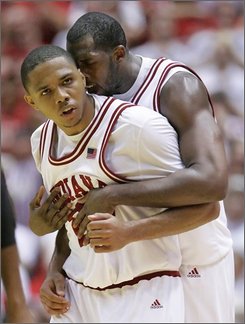 CBS Sports and ESPN college basketball announcer Bill Raftery will serve as the host of the men’s portion of Saturday’s Hoosier Hysteria at Assembly Hall according to a release issued today by IU Media Relations.

The former Seton Hall coach, who began calling games for CBS Sports almost 29 years ago, won’t be the only special guest in attendance.

With the NBA lockout still in effect, former IU stars D.J. White and Eric Gordon will be a part of the program and will also sign autographs afterward.

According to IU’s release, fans will be provided with one item for signatures and may not have any other items signed by the IU players or its special guests.

Doors will open at 6:30 PM ET on Saturday and admission is free, but fans are encouraged to bring a canned food item for Hoosier Hills Food Bank.