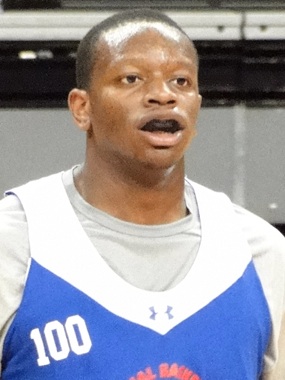 DeMatha (MD) forward BeeJay Anya is one of the most coveted post players nationally in the junior class with scholarship offers from more than 15 schools, including Indiana.

Inside the Hall spoke to the 6-foot-9, 270-pound big man with a 7-foot-9 wingspan about his interest in the Hoosier program, his relationship with Victor Oladipo, the transformation of his physique over the last year and several other topics:

“I’m interested in IU. They’re the same as the rest of my schools because I’m completely wide open at this point.”

On his relationship with current IU guard Victor Oladipo:

“Me and Victor are very close. Our parents know each other very well. He’s like a brother to me.”

On how he transformed his body over the last 12 months, including weight loss of close to 40 pounds:

“Just eating better. Cutting out stuff from my diet. Eating better basically and working out every day and running. It’s helped me a lot. We’ve been having open gyms (at DeMatha) and I’ve been running better. I can jump better and I’m a lot stronger, too, because I’ve been lifting. I think it’s benefited me a lot.”

On the strengths of his game and what he’s looking to improve upon:

“I think my strengths are definitely attacking the rim and rebounding. And I want to get better at facing up and shooting the 16- to 17-footer and just being able to be more consistent with my jump shot. And get my ball handling better as well.”

On how the summer went playing with Team Takeover in the EYBL and what it was like playing in front of college coaches in July:

“It was great because our team did very well. It was great for coaches to come see us play at the Peach Jam, in Orlando and other events that we played in. It was a great experience for me and hopefully I’ll get to experience it again next year.”

“Whenever they’re allowed to call me, that’s when they call me. They came down on Tuesday to open gym as well. I think I’ve talked to everyone on the coaching staff so far.”

On what he’s learned about the program from the coaching staff and their recruiting pitch:

“They’ve talked about how they have a trainer there that does wonders for the players, gets them stronger, more athletic. They think I could be a good fit and that I can come in and make an impact immediately.”