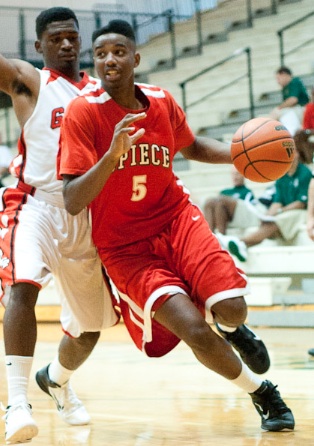 2014 Evansville Bosse wing Jaquan Lyle played the spring AAU schedule with the Eric Gordon 15-and-under team, but made the move to Spiece Indy Heat 16-and-under for the summer.

Inside the Hall caught up with ESPN.com’s No. 10 player nationally in the 2014 class after a pool play game at the adidas Invitational on Wednesday for a Q & A:

On his debut with Spiece Indy Heat:

“The first game was pretty rough. I don’t think I scored. I wasn’t really looking for my shot. I was finding my players, rebounding the ball and playing D. It was good overall.”

On why he moved from Eric Gordon to Spiece:

“I felt like it was needed for me to get better as a player because playing 15-and-under, I just killed. I just wanted to move up and get some competition.”

“Michigan State is showing the most interest right now and Ohio State. West Virginia said they’ll watch me a lot this weekend. Indiana is still recruiting me real hard.”

On potential visits after AAU concludes:

“I want to get down to Bloomington again, Ohio State and Xavier. Those are probably my next three.”

On the progression of his game in recent months:

“I’m getting my jump shot a lot better. It’s getting a lot quicker. My release is following through a lot better, too.”

On how playing with point guard P.J. Thompson can help him move into more of a scorer’s role:

“I think playing with P.J. can move me off the ball to my natural position which will probably be shooting guard in college. I won’t have to handle the ball as much and he’s a good point guard so I like it.”