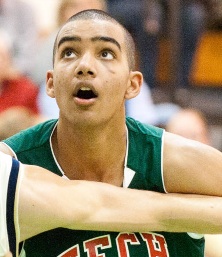 CARMEL — Tournament play of the 2011 USSFA High School Shootout began Sunday morning at Carmel High School and by the end of the day, Lawrence North was the last team standing. The Wildcats, led by the stellar play of Eron Harris, finished the weekend undefeated.

Inside the Hall was in attendance and here’s a rundown of the prospects we caught on day two:

— Trey Lyles, Indianapolis Arsenal Tech: Lyles continued his strong play as he helped lead Tech to the finals of the 1st place bracket, where the Titans fell to Lawrence North. Lyles scored 32 points and pulled in double digit rebounds in that contest. The 6-foot-8 forward knocked down jump shots from the perimeter, earned his way to the foul line and was efficient working out of the low post. Lyles was relentless on the glass and his hard work was rewarded with second chance points throughout the day. Sunday was another productive day for the youngest Indiana commitment, who has been busy for most of the spring with Spiece Indy Heat and adidas Nations.

— Jeremy Hollowell, Lawrence Central: Hollowell was outstanding on Sunday as he scored 26 points in an 84-73 win over Bowman Academy and 28 points in a 64-57 loss to Tech in the tournament semi-final. He scored in nearly every way imaginable: jump shots from all over the floor, attacking the rim and finishing contested drives, earning second chance points on the offensive glass and scoring out of the low post on occasion. Hollowell was also effective as a distributor as he drew double teams and was able to teammates for open looks. Lawrence Central clearly missed 2012 point guard Tyler Corley, who was out of town at an Elite Camp, but Hollowell did his best to lead the Bearcats all weekend long.

— Ron Patterson, Broad Ripple: Patterson helped lead Broad Ripple to the second place tournament championship where he finished with 28 points in a 76-73 win over North Central. He struggled with his outside shooting, but the 6-foot-3 guard did a great job of scoring from 17 feet and in. Patterson had his mid-range jump working off the bounce and showed the ability to knock down the turn around jump shot when backing his man down. The class of 2012 commitment moved well without the ball, earned easy scoring opportunities by cutting to the basket and excelled on the fast break with dunks and layups. Patterson also found his way to the foul line frequently by using his physicality.

— Jaraan Lands, Brownsburg: Lands scored 27 points and grabbed six rebounds in a 55-36 win over Sullivan in the fourth place bracket. He’s an opportunistic prospect who does a great job of scoring by taking what the defense gives him. He has the shooting touch to knock down 3-pointers and mid-range shots and the strength and ball handling to get to the rim and score or draw contact. Lands was solid on the offensive glass and used his size to overpower smaller opponents. If he can improve on his shot selection and overall athleticism, it should make him a much more dangerous player entering his sophomore season.