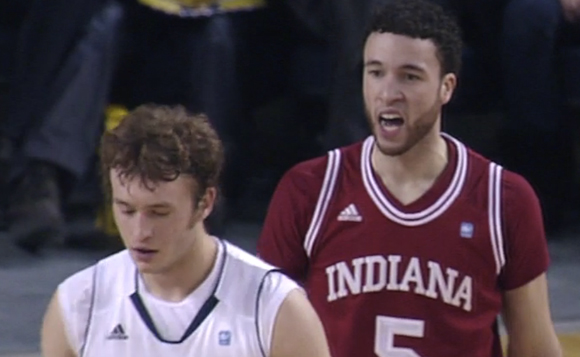 Well that got interesting.

After Indiana found itself down by as many as 22 in the second half and just about dead on the afternoon, it mounted an aggressive 25-7 run over the last 5:26 of the ballgame and nearly pulled this sucker out.

Michigan’s inept free-throw shooting in the closing minutes helped a good deal. (It only finished 19-of-37 (51.4 percent) from the line for the game.)

But the Wolverines mounted that big second-half lead on the strength of some healthy three-point shooting (8-of-15 for 53.3 percent), as Indiana struggled to defend from beyond the arc. Tim Hardaway Jr. was also unstoppable for a stretch in the second half, exploiting a mismatch with Daniel Moore. The freshman scored a career-high 26 points on 9-of-11 shooting (4-of-6 from three), though he was part of the free-throw problems (4-of-9).

Indiana turned the ball over on several occasions to start the game, which limited shot opportunities and got the Hoosiers off on the wrong foot. But they held Michigan to just three points in the last 6:38 of the first half — all coming on free throws — and went into the locker room down eight despite 10 turnovers and just 37 percent shooting from the field.

Looking at this weird, unbalanced one during the low stretches, Indiana just wasn’t sharp enough this afternoon. But the Hoosiers showed much resilience in only losing by four.

+ After attacking the basket during their second-half comeback, some questionable shot selection doomed the Hoosiers in the final seconds. With 15 ticks to go, Matt Roth took a long, contested three he wasn’t quite set for that barely hit the rim. But thanks to two missed free throws by Hardaway Jr., the Hoosiers got the ball back down four still. Yet, Jordan Hulls took a quick contested three of his own at the eight-second mark, which missed as well. Two free throws by Darius Morris right after pretty much put this one away.

Of course, with limited time on the clock, the Hoosiers didn’t have the luxury of running a ton of clock to find better looks. Still, with the margin for error low at that juncture, it was the turning point of the comeback.

+ Christian Watford’s performed well in his return to action. He scored 14 points (6-of-10 from the field, 2-of-4 from three) in a limited 22 minutes. His shot didn’t seem to be affected at all by the wrap on his hand, which bodes well for the Hoosiers heading forward.

+ While Michigan had a rough go of it at the line, the Hoosiers weren’t that great themselves — shooting only 13-of-22 for 59.1 percent. And they only hit 25 percent (4-of-16) from three. Shoot a little better in either category, and it could have tipped this game in Indiana’s favor.