Zeller leads No. 1 Washington past No. 2 Princeton 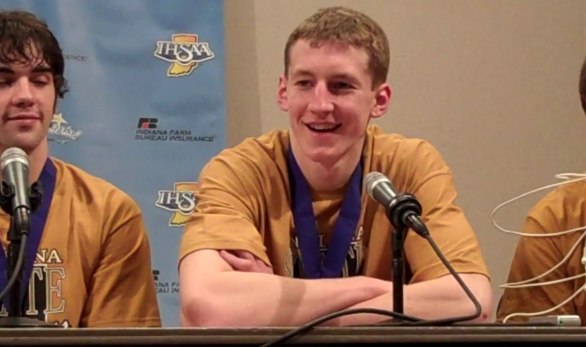 Washington’s Cody Zeller meets with the media following the Hatchets’ 65-62 overtime win over Gary Lew Wallace in the 2010 Class 3A state championship game. Photo by Inside the Hall.

+ Austin Etherington (Hamilton Heights): Hamilton Heights fell to Maconaquah, 73-66, on Feb. 4. No official stats were reported, but did receive a report that Etherington shot just 3-of-15 from the field. (Update: Finished with 15 points according to commenter LDIU.) Game against Westfield on Feb. 5 was postponed due to weather.

+ Hanner Perea (La Porte La Lumiere): Twelve points in a 78-45 win over Summit Christian Academy (MI) on Feb. 5. Game at Gary Lew Wallace on Feb. 4 was postponed due to weather.

+ Peter Jurkin (United Faith Christian Academy, NC): Out until February with a stress fracture, according to The Charlotte Observer.

+ Ron Patterson (Broad Ripple): Did not play this week. Broad Ripple returns to action on Feb. 10 against Indianapolis Manual.

+ Jeremy Hollowell (Lawrence Central): Did not play this week as games against Franklin Central and Indianapolis Manual were postponed due to weather.

+ Mitch McGary (Brewster Academy): Team-high 10 rebounds (points not reported) in an 89-55 win over Next Level Prep of Canada on Feb. 3. Not listed among the leading scorers in a 81-54 win over the Robinson School (NJ) on Feb. 4.

+ Basil Smotherman (Heritage Christian): Did not play this week as games against Triton Central and Covenant Christian were postponed due to weather.

+ Mark Williams (Cleveland Benedictine): Fourteen points in a 74-62 win over Collinwood on Feb. 4. Ten points in a 62-46 win over the University School on Feb. 5.

+ James Blackmon Jr. (Ft. Wayne Luers): Sixteen points in a 69-67 win over Ft. Wayne Wayne on Feb. 4. Game at Indianapolis North Central on Feb. 5 was postponed due to weather.

+ Trey Lyles (Indianapolis Tech): Did not play as game at Indianapolis Arlington on Feb. 4 was postponed due to weather.

+ Ernie Duncan (Evansville Harrison): Twenty-one points in a 87-66 win over Evansville Memorial on Feb. 4. Twenty-three points in a 74-67 win at Jeffersonville on Feb. 5.

+ Jaraan Lands (Brownsburg): Nineteen points in a 62-59 triple overtime win over Crawfordsville on Feb. 5. Lands scored eight in the final overtime. Fourteen points in a 55-45 win at Westfield on Feb. 4.