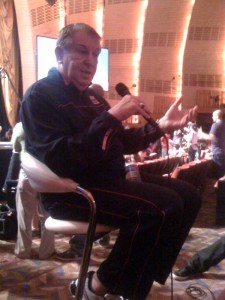 I’m in New York for a couple days for the World Basketball Festival. During today’s media session at Radio City Music Hall, I snuck in a question to USA Basketball chairman Jerry Colangelo about what he’s seen from Eric Gordon, and what his chances are of making Team USA as they trim the roster down from 15 to 12 soon as the World Championships approach at the end of the month.

The squad is guard and wing-heavy, so Gordon has some competition to make the final cut.

Here’s his lengthy quote in its entirety:

Well there was a guy that worked for me for years and many of you will remember the name —  he’s gone now — Cotton Fitzsimmons, who coached in the NBA for many years. I hired him out of Kansas State back in the 70’s in his first NBA job. He used the line: “You can never have too many shooters.”

So when you get down to looking at a roster, and if you truly believe in a team concept and components that you need to be successful, it’s not just a group of stars or the 12 best players. “Who complements one another?”

And people coming off the bench should be specialists. And shooters are at a premium — especially in international ball. So for that reason, I would tell you that Eric Gordon has a great opportunity. Now, he has to earn it during the course of what happens in the next few weeks. But he can shoot the ball.

He kind of reminds us of a few players — not that he’s that similar –but the name we keep coming up with is Vinnie Johnson, who played with the Pistons a few years ago. [Note:  It’s been more than a few years.] Because Eric is a strong kid, big body physically, can really go to the basket when he gets a little speed up, but he can definitely fill it up. He can shoot it.