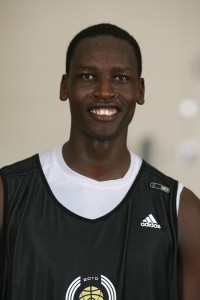 I only caught part of the Africa-Latin American third-place bout tonight at the University of Illinois-Chicago Pavilion. But one thing that stuck out to me about Jurkin beyond his obvious size? He was impressively fast, and smooth, running down the court as his team pushed the pace in the fourth quarter.

I know it has little wow factor, but for a kid that’s yet to fill out his near 7-foot frame and still has two years left of high school, I think it says something that he runs the floor well instead of being awkward or out of sorts.

Below is my brief chat with Jurkin, immediately after he committed on-air to IU and before he was whisked away to other media members.

So you just committed to IU, and have two years left of high school. What factored into your decision to commit early?

I [made the decision] early because I wanted to be focused on school and basketball — try to not think about what college [I’m] going to.

What was it about IU that made you want to commit?

I like the coach. I like the program. I believe when I get there he’s going to make me better and try and make me go to the next level.

What are you looking to work on in the next two years, and maybe what has the coaching staff told you they want you to work on? Is it adding some size to your frame?

I’ve been trying to [add size] … But I’ve had too many games, too many practices [to focus on it]. But this year I’m going to try and be in the weight program and try and [get] big. [I’ll also work on] my jump shot, my dribble, handles and everything.