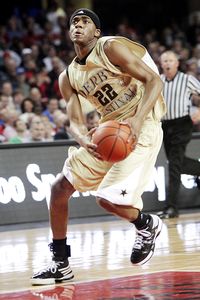 Hoosier Hysteria is on the horizon and it’s time for Inside the Hall’s player-by-player breakdown of the 2009-2010 Indiana Hoosiers. Today: Maurice Creek.

To get a good idea of the impact Tom Crean expects Maurice Creek to have on the IU program, you only need to go back in the archives to August 31, 2009.

That’s the date when the NCAA clearinghouse passed along word that Creek, who used the summer to finish up core classes needed to qualify, would be eligible for the upcoming season.

Upon hearing of the green light from the NCAA for Creek to begin working out with the team, Crean tweeted that grown men were hugging each other all over Assembly Hall. (To be fair, I hugged Ryan and Eamonn upon hearing the news.) But yeah, Creek is a special enough talent to produce man hugs out of the IU coaching staff. Powerful stuff.

Creek brings a trait to Bloomington that last year’s team sorely lacked: a polished offensive game capable of consistently putting points on the board. A soft spoken kid from Oxon Hill (MD), the 6-5 Creek switched schools a couple of times before landing at Hargrave Military Academy for his senior season. He averaged 18.4 ppg for a team that finished 27-2.

The bread and butter of Creek’s offensive prowess is his ability to knock down jump shots. His release is quick, smooth and doesn’t require much room to get off. His ball handling needs some tightening up, but he’s more than capable of scoring in the lane off the dribble using his right or left hand. On the other side of the ball, he embraces and takes pride in playing defense. He’s probably at his best defending on the ball and his athleticism allows him to play the passing lanes well.

Bottom Line: Creek comes off as a quiet and humble kid off the court, but between the lines his competitiveness and desire to get better should make him an All-Big Ten caliber player down the line. With his eligibility questions behind him, he’ll battle for a starting position in the backcourt and should quickly become a mainstay in the IU rotation.

Quotable: “With Maurice Creek we were very fortunate to get on him at an early age. (Assistant Coach) Bennie Seltzer was the first one to see him back when we were at Marquette and we offered him a scholarship as a 10th grader. We recruited him like he was a senior the last few years. He was someone that, when we got to Indiana, he showed great faith in us as coaches and in our style of play. He chose to commit to Indiana with us before he had ever seen the campus. He’s a prolific shooter and he can get to the rim. He’s developing a pull-up game and as his ball-handling catches up with his ability to shoot the basketball, he will be an outstanding guard. He’s a long and athletic guard and we feel he will be able to create a lot of havoc defensively. He is someone that loves the game and has been well schooled and well taught and we feel excited to have him.” – Crean on Creek.