Moses Morgan on IU: ‘I have a very high interest in them’ 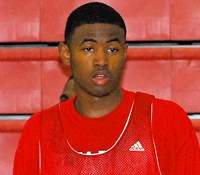 The last time we caught up with Moses Morgan in early May, there was one school at the top of his list: Indiana.

And the 2010 wing and son of former IU player Winston Morgan is still high on the Hoosiers.

Morgan is playing this summer for the ICAN All-Stars and hopes to fit in a visit to Bloomington to check out the IU campus soon.

“Probably the middle of August,” Morgan said of a timetable for a possible trip.

The 6-5 wing, who is also being recruited by Arizona, Memphis, Oklahoma, UNLV, Marquette and Utah, attended the LeBron James Skills Academy last week and got a chance to learn from the Cleveland Cavs star.

“We got to play with LeBron a little bit, Morgan said. “He spoke to us a few times with the wing players during drills. Just going up against him was a great experience. When we were doing drills on running the wing and catching and shooting, he talked about being ready to make your move without traveling. I tend to do that sometimes.”

Morgan also witnessed the now infamous dunk by former IU guard Jordan Crawford on James during a pick-up game and offered his thoughts.

“I saw it,” he said. “The people I was sitting with were going crazy. Everybody else was going crazy too. It was pretty bad for LeBron.”