Eric Gordon dishes on girls and hobbits (yes, you read that right) 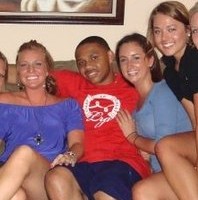 Let me preface this by saying I’m a huge Eric Gordon fan. He seems to be a soft spoken, genuinely nice kid that does things the right way. I even own an “Air Gordon” t-shirt and admittedly watched YouTube highlights of him when I was down after IU losses to Northeastern and Lipscomb earlier this year. That said, if there is one weakness for Gordon, it’s his uber awkwardness when talking to the media. Case in point, this interview with Nick Friedell of the superb NBA blog, Ball Don’t Lie:

Ball Don’t Lie: Every rookie has to make a major transition once they get into the league, but you’ve gone from living in Bloomington, Indiana to living in Los Angeles, California. What has the transition been like?

Eric Gordon: Well, it’s a major difference. Bloomington is a small city and it’s just a whole different atmosphere. You’re on your own now; you’re basically a grown up. When you’re in college, you still have a lot of different priorities as a young adult. (The professional lifestyle) is just a totally different change.

BDL: What about the differences between girls in both cities?

BDL: They’re a little more “enhanced” in L.A. though, right?

BDL: OK, so what’s up with your “Hobbit,” nickname?

EG: You know what? I don’t need to know. All I know is the The Hobbit (Pauses) I forgot, I know it’s either a cartoon or I know it’s off of a movie. I think they played ’em both, but I know [the name] does [or] it means special powers or something like that.

BDL: So you have special powers?

BDL: What do you think?

You might say that Friedell’s questions are subpar, but BDL does quite a few interviews like these. They’re normally offbeat questions designed to draw a few laughs and maybe even teach their audience a few things they didn’t know about the subject. Translation: a chance to have fun away from the beat reporters that like to ask the same mundane questions day after day.

In this instance, most of the interview comes off as downright awkward and in places, unreadable. Does Eric Gordon really not know what a hobbit is? I guess Gordon Sr. didn’t slide some J.R.R. Tolkien under the door when EJ was locked in the basement until 15. I almost feel sorry for Gordon until I remember that he’s one of the best 20-year old basketball players in the world and oh yeah, a millionaire.