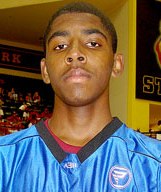 Tom Crean, Roshown McLeod and several other coaches were on hand for St. Patrick’s junior guard Kyrie Irving’s debut last Thursday. After sitting out the first 10 games due to transfer rules, Irving scored 16 points in a 74-42 win. Inside the Hall caught up with the No. 27 player in the 2010 class, according to Rivals.com, for a Q & A.

On what it was like to get back on the court after sitting out 10 games:

“It was great. It was great to get back on the floor because I’ve been dying to play since I transferred to St. Patrick’s. My first game, I was a little nervous and I had a lot of jitters. I just wanted to make a quick contribution for my team on the defensive side and also on the offensive side. When I wasn’t playing, I was just trying to challenge my teammates every day in practice and be a leader on and off the court.”

On becoming a leader:

“I’m not really a vocal guy, but usually I lead by example. That’s what I’ve tried to do at St. Patrick’s. Work hard everyday and also challenge my teammates but more importantly challenging myself. I wasn’t playing in the games and I had to challenge myself day in and day out.”

On what he worked on in practice during the 10 games he sat out:

“My quickness, my endurance and my defense. At St. Patrick’s we play against great teams that have great guards and we’ve gotta be able to defend. That’s the most important thing. KB (St. Patrick’s coach Kevin Boyle) preaches, like when I first got there, ‘you’re going to have to be able to play defense.'”

On the transition from Montclair Kimberley Academy to St. Patrick’s:

“Transferring to St. Patrick’s was the best decision I ever made. MKA, it was a great experience there. Academically it was one of the best schools in the state. I just wanted to move on to the next stage athletically and take my game to another level so I went to St. Patrick’s.”

On his individual goals and the goals for his team the rest of the season:

“My personal goal is to make all-state and make my teammates better when I’m on the floor. Never take a possession off and my consistency on the defensive side and the offensive side. Just being alert and contributing all the time when I’m on the floor. As a team, we want to win the national championship. We’re playing Lincoln and Oak Hill and we want to beat those guys and St. Benedict’s. And secondly, I want to win state.”

On what he’s looking for in a school at the next level:

On his impression of Bloomington from his visit last fall:

“The atmosphere there was great. The student body, the whole atmosphere was just unbelievable. I’d never been to a big college like that before. That was one of my first visits and it was just great. It was a packed house for the first game and at that moment, when I was at the game, I could imagine playing on a big stage like that.”

On his relationship with Coach Crean and Coach McLeod:

“My relationship is great with them. Coach Crean is one of the best coaches in the country. He has a couple of NBA players and I went to watch their practice and everybody was going after each other and that’s what I want. In practice and then translate into the game. He challenges you everyday as a person and as a player and that’s what I like most.”