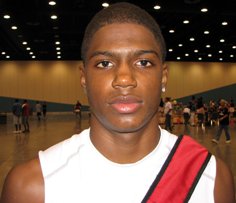 A couple of days ago, I wrote about Indiana offering a scholarship to Jeffersontown’s Aaron Cosby. I’ve learned that Thursday Indiana coach Tom Crean and assistant Tim Buckley will travel to Louisville to watch Cosby in an open gym.

Cosby is already planning an unofficial visit to IU this coming weekend and he’ll be in Bloomington for Hoosier Hysteria as well.

Although Cosby is hearing from a large list of schools, two places in particular stand out for the 2010 guard.

“Right now, Indiana and Minnesota,” Cosby said when asked about the schools sitting atop of his list.

Cosby missed most of the 2007-2008 campaign after transferring from Manual to Jeffersontown and is looking forward to getting back on the court on December 19.

While Cosby doesn’t have a definite timetable for making a decision, an early commitment isn’t out of the question.