Myles Brand: “I would like to see it at least two years” 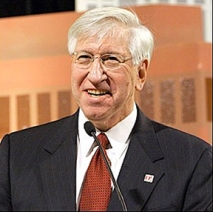 Back in April, I wrote about speculation that Myles Brand and David Stern were having dialogue about a change to the NBA’s age limit rule for the draft.

Our old friend Myles confirmed that speculation when he talked to The Dallas Morning News about the current rule and the changes he’d like to see made:

This is a topic that’s only going to garner more attention now that Brandon Jennings has peaced out from Arizona and is headed east because he couldn’t enter the draft. Personally, my vote is to abolish this rule completely and let kids go straight to the NBA if they choose with one caveat: if a kid opts for college, he’s required to stay three years. This would allow the freedom of choice, but it also gives college coaches a chance to protect their programs from early entry candidates decimating their rosters.