And Kelvin Sampson claims another casualty 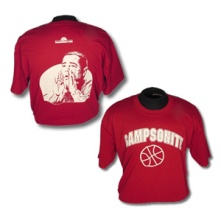 We’ve seen the reverberations inside the program since Sampson left: players getting dismissed, scholarships being lost, an AD peacing out on the program. But what about us common folk who were looking at the Sampson tenure in the long haul? What about Matt Kesten who sold 2,592 “Sampsonite” shirts to Steve and Barry’s and hasn’t seen a penny for it?

Kesten is a 23-year-old entrepreneur, who started a sports promotional products company called Hoosier Beat after graduating from Indiana University. After the school hired Kelvin Sampson to be their head basketball coach, Kesten received approval from Sampson to, without royalty owed, make “Sampsonite” T-shirts.

In November, three months before Sampson was forced to resign because of recruiting violations, Steve & Barry’s in Bloomington, Ind., took an order of 2,592 of Kesten’s “Sampsonite” T-shirts and agreed to pay $12,312 within 60 days.

“They told me a check was cut on December 28th,” Kesten said. “But they told me that it was awaiting a signature.” Kesten was told the only person who signed the checks at the company was co-founder Barry Prevor.

Weeks went by and Kesten was promised it was coming. Over the last four months, he says the exact status of his check became more vague and it has been impossible to get a phone call returned from the company.

“It was only in the past week where they set up an inquiry line,” Kesten said. “I assume that was done for the hundreds of people like myself who are just trying to get through to get the money that was owed to them.”

Now, this anecdote speaks to the larger point of Darren Rovell’s scoop: Steve and Barry’s is likely filing for bankruptcy and thus, aren’t paying out to their vendors here and there. But one would think Mr. Kesten is getting the rawest of deals out of all of them because well, I’m sure Steve and Barry’s customers aren’t clamoring for “Sampsonite” t-shirts. Just a hunch.

I have a similar quandary: my signed and framed column I wrote praising Sampson is somewhere amidst all the junk in my closet. Certainly not going to ever be putting that up on the wall. Bastard.