Should IU block Jordan Crawford from transferring to Kentucky? 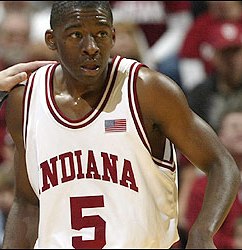 The latest departure in the mass exodus from the Indiana program, Jordan Crawford, is reportedly hopeful that he’ll garner interest from a program in Lexington, Kentucky. This according to Jerry Tipton of The Lexington Herald Leader, who got the following update from Jordan’s mom, Sylvia:

“I would hope they would be interested,” she said.

But, first, the Crawford family and Indiana need to work out the terms of Crawford’s release. In the wake of former IU Coach Kelvin Sampson’s departure, Crawford decided last week to transfer from Indiana.

Indiana has not decided what, if any restrictions, it wants to place on Crawford’s choice of a second college, spokesman J.D. Campbell said in an e-mail message.

So the Crawfords must wait for those details to be finalized before seriously considering Jordan’s options.

Besides Eli Holman, Crawford is the only player that left the program willingly, so Indiana has some decisions to make on his situation. It is not uncommon for a school to place restrictions on a transfer, but there have been cases in which a student athlete has fought the restrictions in the media and the school eventually caved to avoid the bad publicity.

Crawford will likely be prohibited from transferring to another Big Ten school, but Kentucky could also be a no-go because of the rivalry between the schools and the fact that Jordan’s brother, Joe, also played there.

So my question for you, ITH’ers, is this…Should IU block Jordan Crawford from transferring to Kentucky? Either way you go with your answer, back it up with some substance and hit us up in the comments. Happy Father’s Day.