D.J. White will have none of your shenanigans 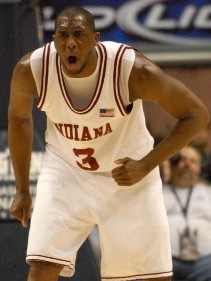 Remember all of the chaos down the stretch this past season? Suspended players, a dismissed coach, players skipping practices and meetings. I’m sure there are some other things I left out (or that I can’t mention). One name that had no involvement in any of this: D.J. White. This according to Rick Bozich of The Louisville Courier-Journal, who wrote the following on his blog:

Last Wednesday night when new IU coach Tom Crean spoke at Huber’s Orchard and Winery, I sat with two secretaries in the basketball office as well as a women who worked in academic counseling.

All three said D.J. White was as nice as any player who has come through the IU program, a complete gentleman who was not involved in any of the nonsense that brought the Hoosiers season down in the final month.

This isn’t a groundbreaking revelation. We all know what a fine lad Mr. White is. The reason I bring it up is that it’s still troublesome to me, more than two months removed from the season, that one of the best players to ever don the cream and crimson had his final season go straight down the toilet. And until the team takes the floor again next winter and we all have something to cheer about, I’ll probably continue to think about it. He deserved better than Kelvin Sampson and a few teammates who quit on the season. Here’s to a prosperous NBA career for you, D.J.