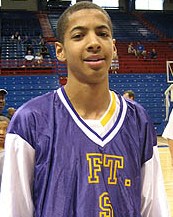 Score another one for Tom Crean and the Hoosiers as 6-4 160-pound Verdell Jones of Champaign, Ill., has chosen to join IU in the class of ’08. He picked the Cream and Crimson over Minnesota and Kentucky.

Jones had this to say to the Champaign News-Gazette via e-mail:

“I have chosen to attend Indiana University to be a future Hoosier under Coach Tom Crean,” Jones wrote in an e-mail to The News-Gazette. “I chose the university because of playing style, Coach Crean’s energy, and the tradition.”

Although not a huge coup for the Hoosiers — Rivals ranks him at No. 127 in the class and God do we still need size — the three-star recruit should certainly have a chance to nab some playing time early and often next season and was among the best remaining unsigned guys for ’08

Let’s face it, friends: we need bodies, and lots of them.