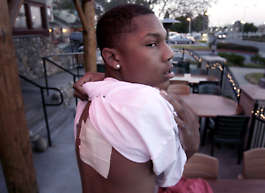 Buried at the bottom of an article in yesterday’s San Fransisco Chronicle was a note on Indiana freshman Eli Holman, who has yet to say publicly whether he’ll remain with the program beyond this year.

Decision time: Former Richmond High center Eli Holman is still undecided on whether he will transfer from Indiana. Holman will make a decision by the end of next week, said Hashim Ali, founder of Holman’s AAU team.

At the time of Tom Crean’s hiring, Holman said he planned to return to California and would have a decision shortly. And with his participation in recent workouts, the assumption was that he would indeed return. However, this blurb leads one to believe that Eli is still contemplating his future. After everything Eli went through to get himself to this point (the shooting, the eligibility dispute last fall and his wrist injury), it’d be a shame to see him play out his college career elsewhere.