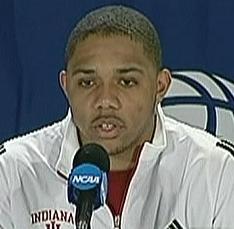 Stock Watch is Inside the Hall’s look at the NBA draft prospectus for Eric Gordon and D.J. White.

With a little more than two months remaining before the NBA Draft takes place, some of the best mock drafts are starting to trickle onto the Web. Here’s a glance at a few of the best out there and where they have Gordon and White pegged at this point (it’s important to remember that until the draft lottery is conducted, the teams these sites have listed are relatively meaningless):

— Draft Express: Eric Gordon No. 7 to the Milwaukee Bucks; D.J. White No. 42 to the Sacramento Kings

— NBAdraft.net: Eric Gordon No. 7 to the Milwaukee Bucks; D.J. White No. 31 to the Minnesota Timberwolves

— HoopsHype: Eric Gordon No. 7 to the LA Clippers; D.J. White not listed in the first round and Hoops Hype does not do a mock draft of the second round

— InsideHoops.com: Eric Gordon No. 6 to the LA Clippers; D.J. White listed as “In the lower first round mix.”

— Hoops World: Eric Gordon No. 6 to the LA Clippers; D.J. White No. 34 to the Minnesota Timberwolves

A couple of quick observations from this exercise: First, Gordon seems to have fallen behind Jerryd Bayless of Arizona on nearly every draft board. Before the second half of the season, most of us thought it was going to be Gordon vs. Derrick Rose for the top guard in the draft. Now, it appears Gordon is the No. 3 guard in the draft and a couple of boards have him below O.J. Mayo. Shooting 32 percent and committing 4.2 turnovers per game over your last seven games will do that.

Second, D.J. White is not a sure thing to land in the first round which is hard to believe given the kind of season he had. However, when you take into consideration that White doesn’t fit the prototype for a true power forward in the NBA, you have an explanation on why many teams might shy away from taking him in the opening round.