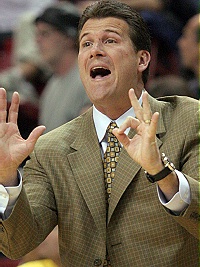 I’ve long held the belief that those who push for a Steve Alford hire are among the silliest the IU fan base has to offer. Because Alford was once an outstanding college basketball player, in the eyes of some he is now qualified to coach one of the most storied programs in that sport’s history. “He’s an Indiana boy!” “He played for Coach Knight!” All nonsense — stupid, illogical nonsense.

It’s especially dumb because Alford has had a chance coaching a Big Ten team, and has failed rather spectacularly. His career conference record at Iowa? 61-67, with three NCAA appearances and three NITs. He never got past the second round in either tournament.

Now he is banished to the desert, where failed Big Ten coaches go. And yet, inexplicably, Alford still has enough rep to get fawning columns written about him in the Albuquerque Tribune. To wit:

In evaluating the possible Steve Alford-bolts-to-Indiana scenario, let’s begin with a three-part hypothesis:

2. The Hoosiers will be wise enough to go after Alford with open arms and open wallets.

3. Alford will be homesick enough to drop the Lobos like a hot rock and go home like Ulysses returning to Ithaca.

You can’t help but look at an Alford/Indiana match and see sweet things. This is Lucy and Ricky, Hope and Crosby, Doris Day and Rock Hudson.

First of all, I’m loathe to pick apart a columnist’s work bit by bit. It’s a bit mean. Also hilarious, but mean. But it’s this sort of clueless rhetoric we get any time Steve Alford and Indiana is brought up. It’s as though people are so willing to get a “storybook” hire at IU they’ll ignore his negatives (his abysmal coaching resume) and invent new positives (“integrity,” as if anyone who enabled Pierre Pierce can be lauded for integrity). Also, they’ll apparently use references so old — seriously, Bob Hope and Bing Crosby?! — that dropping Ulysses feels fresh by comparison.

So let’s continue down the rabbit hole. This is the scourge of the Steve Alford backer. Seeing that Richard Stevens writes for Albuquerque paper, the only plausible explanation to follow is that Lobos fans already hate Alford so much they’re trying to sell him out of New Mexico. That has to be the explanation. You’ll see what I mean:

A young, flashy coach with charm, sophistication, media savvy and poise, who knows how to recruit the heck out of the country and coach the heck out of a basketball team.

Again, none of this is true. Alford has had his chances. He has failed.

He also is Indiana – to the roots, to the core, to the heartland. He is kin. Hoosier All-American. NCAA champ. Indiana All-American boy all grown up.

Not only are none of these sentences, they have nothing to do with being a good basketball coach. Repeat: nothing.

This probably is a truth, too: Alford is a better basketball coach today than Indiana legend Bobby Knight. Alford is not restricted by old-fashioned idealisms about man-to-man defense. He relates to kids better. He is more flexible.

This is the part of the column where Mr. Stevens seriously begins to lose steam — he likely had to turn over the Bob Hope record playing on his Victrola — and so starts saying random things that make Steve Alford look like a golden god. Like:

— And Alford manages a game like chef Emeril Lagasse manages an omelet over a low flame.

— If the Gods watching over Indiana basketball could mold a perfect Hoosier coach, it would be Alford with maybe a dash less snobbery. Let Alford keep the ego. The Hoosiers won’t mind. He’s one of them.

— Alford is a combination of Rick Pitino and Knight. It’s a good mix. He has the slick and the flash to wow boosters and fans. He believes fundamental basketball combined with honest effort will win games. He works hard. He coaches hard. He has nice hair.

Seriously, people, he has nice hair. Nice hair! This is what we need. This is the coach we’ve been looking for. This is our man — the man who spends the extra ten bucks on American Crew at his salon. (Yes: Steve Alford goes to a salon. Lesser coaches commiserate in barber shops. Duh.)

More to the point, the Hoosiers should realize there is no basketball coach in America more suited for this job, no coach more capable of becoming an instant symbol of Indiana basketball and Hoosier values.

Oh, and speaking of space, let’s allow Richard to close with about six cultural metaphors, all teetering on varying levels of irrelevancy:

It’s like Lassie, E.T. or Dorothy going home. It’s natural. It’s what it should be. You can almost envision Alford in his Lobos office clicking his heels and hoping for a little magic that will transport him past Kansas, over Iowa and deep into the Indiana heartland.

It might happen. It should happen. It’s Alford’s birthright. It’s his destiny. For Indiana, it’s time to bring E.T. home.

OK, so let’s figure this out: Alford is Lassie. No wait — he’s Dorothy. And he wants to click his heels three times and go home, but then who is E.T.? Is E.T. his dog? I thought Lassie was his dog!

Wait, wait, I’ve got it: Steve Alford is the holy trinity of irrelevant, needless basketball coaches/cultural symbols. He’s Dorothy, Lassie, and E.T. and himself simultaneously. Fortunately for IU fans everywhere, E.T. has just as good a chance at the IU job this summer. Though his hair is a bit of an issue for me…