“I think the majority would want him to stay” 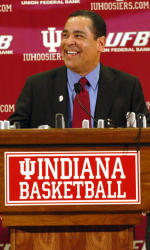 New York Times columnist William C. Rhoden offered up an alternative view this morning on Kelvin Sampson. Unlike countless mainstream media opinions we’ve read over the past six days, Rhoden offered support for the embattled Indiana coach. Here’s a piece of what Rhoden had to say:

Let me make the case for Sampson to remain at Indiana. One more chance. He has clearly blundered — maybe twice. Once at the University of Oklahoma and now, according to an N.C.A.A. report, at Indiana, which hired him in 2006. In pursuit of players, Sampson cannot seem to keep his fingers off speed dial.

But if McRobbie hasn’t made up his mind, he should step back, tap into a significant, mostly silent, number of faculty members and Indiana supporters who would like to see Sampson remain as the coach.

Before I continue any further, I must say that I seriously doubt that there is still a significant number of Indiana supporters who would like to see Sampson remain as the coach. There might be some, but to call the number significant is a stretch. Now, let’s continue with more of Rhoden’s column:

One of them is John A. McCluskey Jr., a professor of Afro-American studies at Indiana and an adjunct professor of English. McCluskey arrived at the Bloomington campus in 1977, a year after Indiana went 32-0 and won the national championship. A former football player at Harvard — he was the first African-American quarterback in the Ivy League’s modern era — McCluskey saw the great years at Indiana, then the mediocre ones, when the game seemed to have passed Knight by. He was a witness to the ordinary Davis teams.

“What I would like to see happen is that he stay on, he gets censured one more time, but he’s on that short leash again,” McCluskey said Sunday from Bloomington. “It’s a divided campus here. I think the majority would want him to stay, particularly after last night.”

If the latest poll we took here on Inside the Hall is any indication of the pulse of the fanbase, 83% of you say that Sampson should be fired. Nothing against Rhoden, he’s a great columnist for the best newspaper in the country, but I think he totally dropped the ball with this piece. He found one person willing to speak out in support of Sampson and transformed that into support that doesn’t exist.

Let’s wrap this up with a couple of questions:

1) Do you really believe there is a part of the fanbase that would like Sampson to stay? (His family and the players don’t count.) Particularly, if there are any of you that want to see him stay, please post a comment or if you think you’ll incite a riot, just drop me an email. I’d like to hear your logic.

2) And the crazy question to consider, what would be the reaction, if by some miracle, Sampson survived? (Not going to happen.)