The Morning After: Michigan State 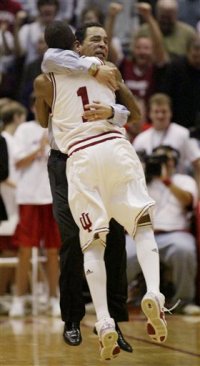 We’ve all been guilty of it. We are finished with Kelvin Sampson, done, finito, that’s it. As you read this, Sampson could win the Big Ten, blow out Purdue by 40, capture a national title, and cure lupus (does lupus have a cure already?) and everyone would still monolithically demand Sampson’s head on a silver platter. And rightfully so.

But for all the unanimous consent to fire on this site, and among ESPN’s chosen local interviewees, last night’s game showcased an atmosphere, and a fanbase, still totally confused and weirded out by what’s happening right in front of them. I watched on TV last night, and it was clear from the Dolby 5.1 that the pregame crowd hadn’t made up its mind to boo Kelvin Sampson, nor had they decided to show solidarity with the embattled coach. Sampson was just sort of there most of the game — drawing angry comments from myself, PostmanR, and my girlfriend, all the while coaching IU to its best win of the season in front of an emotional and raucous home crowd.

Just how the hell are we supposed to feel about that?

I still don’t know. And it was clear from the Kel-vin Samp-son cheer last night — clear from friends on campus who say opinion on KS is split — that I’m not alone. No one who loves IU basketball is totally sure how to feel about all this.

For me, it’s a mixture of sadness, anger, doubt, excitement, revenge, righteousness, forgiveness. It’s hard to say goodbye to someone who knows he needs to leave. It’s hard to force him out when you watch him hug his kids. It breaks the heart to see him cling for dear life in the face of certain failure. And then you remember what he did in the first place — the stupidity and arrogance — and it brings you back to the angry, vengeful thoughts you first had.

And that’s what it is right now. That mixture. That confusion. We’re on the tail end of something, and if the above paragraph was any indication, things aren’t going to be easy to synthesize anytime soon.

— What would have made things simpler was if IU would have played all 40 minutes last night like they played the first five. When it was 15-6 and Michigan State showed no signs of slowing down (and IU showed no signs of offensive potential), the assembled audience in my living room had all but given up. Credit goes to the girlfriend for dropping the old “it’s not over” as a means of encouragement, and wow, was she right. We could have been blatantly angry there, could have sworn at Sampson for not only besmurching the program, but for being a bad coach too. Turns out, last night might have been Sampson’s crowning achievement at IU: a dominating win by a coherent, improving team.

Have we seen a more complete performance all season? A better shooting night? A more varied group of contributions? A harder effort? I’m not sure how much of any performance that involves college students you can credit to outside factors. Anyone that has ever played a sport, competitively or not, knows that one of the true beauties of constant motion is the numb sensation it affords. You don’t have to think about anything else to play basketball; you merely think about ball, hoop, spacing, and technique, and the rest floats away happily until you step off the court. So maybe we can parse what IU did last night away from their coach’s troubles, and hope that that’s the kind of thing we can expect to see when Dan Dakich is (presumably) roaming the sidelines in a week.

Wasn’t it beautiful, though? The screens, the spacing, the power of Eric Gordon? Though Wisconsin was a loss, it was a loss not because of IU’s regression but in spite of their progression. Last night, we saw yet another step in that progression. It was what happens when an entire group of kids — stars or not — figures things out at precisely the same moment. It was great.

— What wasn’t so beautiful was D.J. White’s injury. I won’t lie — when I saw the awkward landing, and the D.J. clutching at the back of his knee, I was sure that his luck had once again caught up with him. Torn ACL? It wasn’t beyond my line of thinking, I’ll admit. But a few minutes and one giant roll of ice later, it looked like D.J. was going to be OK, something confirmed today by this Peegs poster. Good for D.J. — he deserves to finish this season at the peak of his performance.

— A quick note about this Scott Skiles rumor: If you think this has any basis in reality, may God have mercy on your soul. It’s not that I necessarily have a problem with a Skiles hire (though I do), but rather the idea that anyone credible at IU would drop a name this early in the process. They’re hiring an interim coach, at which point they have about six or seven months to hire a new guy. You really think they’re going to settle on the pugnacious, what-the-hell-is-with-this-lineup-oh-God-please-play-Tyrus-Thomas Skiles this early? IU’s search process may be irrevocably effed, but no one’s that stupid.

— Everyone caught that Adam Herbert-Kelvin Sampson embrace, which was funny not only because Kelvin is about to join Herbert in unemployment, but because it reflected something most IU fans are just now figuring out: Sampson was Herbert’s hire.

That was reflected in President Michael McRobbie’s press conference, where he refused to chide Greenspan for the hire, instead saying the AD and his compliance office “did their job.” To me, that smacks of the fact that Greenspan heard the rumors about Sampson more often, and for many more years, than Herbert did, and that Sampson impressed the president and won him as a vital supporter in the search process. This is just speculation, of course. If Sampson was Greenspan’s hire, he deserves to take the fall … but if the dialogue keeps up the way it has been, it seems that Greenspan won’t take the fall for Adam Herbert’s boy. Considering Greenpan’s record, that’s only fair.

— One of the more suprising things, at least to me, about the Sampson sanctions fallout has been the reaction of the national media. I know that media people like to high-horse it from time to time — as my friends will tell you, I enjoy a comfy ride on the back of self-righteousness myself from time to time — but the national outrage and calls for firing have been beyond even the normal mainstream’s call-to-arms. What Kelvin Sampson did was bad, and he deserves to be fired, but with the exception of Hubert Davis last night, nary an opinion to the contrary was heard. Digger Phelps, old Bob Knight tagalong, was especially vehement, as though he’s never done anything nebulously wrong in recruiting in his entire life. (Right.) What’s worse is that I agree with Digger — Kelvin deserves to lose his job! — but Phelps’ anger, and the way apparently every IU fan ESPN interviewed last night wanted Sampson fired, made it seem like this fanbase is unanimous in its discontent. After hearing the chants last night, it seems safe to say that’s not true.

Which is to say: Did anyone expect media to be so harsh? These aren’t die-hards; these are the jaded columnists covering the corruption of the NCAA for years and years. Do they really think Sampson’s crimes are worthy of Barry Bonds-esque scorn? (Does Dick Vitale really deem it necessary to bring up Bob Knight every two seconds, who, it can be argued, did things in Bloomington far more morally reprehensible than overuse his phone line?)

And so here we are again, not sure what to think, afraid to not be angry, confused as ever. That’s the damage here. Sports are supposed to be simple. Black and white. Good vs. evil.

Kelvin Sampson has made them pretty damn confusing.