Hoosiers turn up the D for 13th straight win 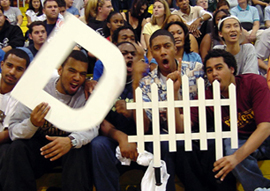 If there was a knock on Indiana in their past 12 games, it was a lack of consistency on defense.

Sure, there were some flashes of defensive brilliance, but all in all, the Hoosiers had yet to put it all together for 40 minutes.

Indiana (17-1, 6-0 Big Ten) held Iowa to 34 percent shooting, forced 20 turnovers and cruised to a 65-43 victory in front of a sellout crowd at Assembly Hall. The win was the 29th consecutive for IU on Branch McCracken Court.

“Our kids are getting better. Our defense was better tonight,” Indiana coach Kelvin Sampson said. “If you keep working at things and have good kids, you usually improve.”

Unlike the first meeting between the two teams on January 2, the outcome was never in doubt. Indiana led 36-27 at halftime and led 46-35 with 13:29 remaining before reeling off nine straight points to put the game away.

Tony Freeman paced Iowa (9-11, 2-4) with 14 points and Justin Johnson, who scored 29 points in the first meeting between the two teams, scored just six points on 1 of 6 shooting.

The 43 points for the Hawkeyes tied a season-low. The other occurrence, however, was a 43-36 upset of then No. 6 Michigan State at Carver Hawkeye Arena.

Indiana will return to action Saturday at 1 p.m. in a non-conference battle with Connecticut. That game will be televised on CBS.