Sampson scoffs at question about schedule 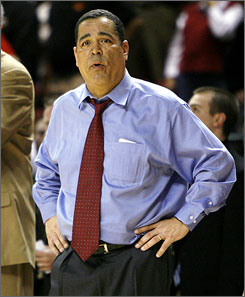 Indiana coach Kelvin Sampson seemed a bit irritated in the Chicago State post game press conference when asked about the strength of Indiana’s non-conference schedule. Here’s a transcript of that exchange:

Reporter: Kelvin, you haven’t played a winning team, a team with a winning record in a while, do you really feel the schedule is readying your team for what’s coming ahead here?

Sampson: Yes, do you?

Sampson: What do you wonder?

Reporter: Well, it’s a whole different league. I just don’t think these teams are the caliber you’re going to face in the next couple of weeks.

Sampson: Well um (pauses), is that unusual from the other teams in the country?

Reporter: Sometimes you get a holiday tournament that’s a little bit more competitive.

Sampson: When we set the schedule up, we looked and said we’re playing Kentucky at home, Georgia Tech, at Southern Illinois, Xavier, Illinois State. Maybe you should give us a little credit.

You already know my take on this topic, but apparently Kelvin doesn’t agree the schedule has been a bit on the soft side.