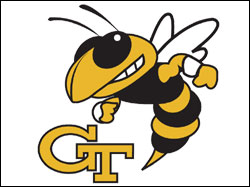 The Georgia Tech Yellow Jackets will make their first trip to Assembly Hall tonight to take on the No. 15 Hoosiers in the Big Ten/ACC Challenge.

The meeting will be the second all-time between the schools. Indiana beat Georgia Tech 87-65 on December 29, 1969 in the Bruin Classic at UCLA. Georgia Tech is 4-4 all-time in the Big Ten/ACC Challenge and IU is 2-4.

Georgia Tech is expected to be a middle of the pack team in the ACC this season, evident by the media’s selection of the Yellow Jackets to finish seventh in the conference in a preseason poll.

6-5 guard Anthony Morrow is the go-to-guy for Paul Hewitt’s team. The senior guard from Charlotte, NC is averaging 19.0 ppg and has hit a three-pointer in fourteen straight games dating back to last season.

Alade Aminu anchors the frontcourt for the Yellow Jackets. The 6-10 junior from Stone Mountain, GA is averaging 14.0 ppg and 6.8 rpg. Tech has two other players averaging in double figures: forward Jeremis Smith (12.2) and guard Lewis Clinch (11.0).

Two players will return from injury for Hewitt’s club: 6-8 sophomore Zack Peacock will see his first action of the season after missing the first five games with a stress reaction in his right foot and 6-1 freshman Moe Miller will also return. Miller started the first two games at point guard, but missed the Paradise Jam after bruising a bone in his lower back.

To learn more about the Georgia Tech program, click here.