Class of 2007 vs. Preseason All-Americans: The ITH game of the century 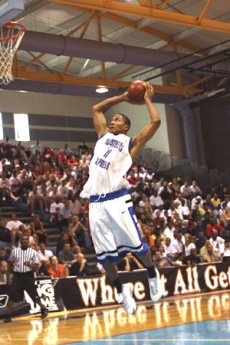 Your loyal correspondent PostmanE, ever fascinated with the joy of potential, has a half-cracked theory floating around in his brain. Big A has already politely disagreed with me, but it’s a good sports debate, so let’s hash it out.

See, I think — thanks to the confluence of a weak All-American class and an incredibly deep crop of freshmen — that, perhaps for the first time in history, a team composed entirely of freshmen would beat the preseason All-American team. In fact, I don’t even think it would be close.

Let’s go to the tape:

I included Rush simply because the preaseason All-American team doesn’t really do a good enough job, in my opinion, of accounting for position, and if you had those six players and needed to field a starting five, you’d put Rush at forward with nary a blink. (I included Ahlfeld because you can’t put a price on overexuberance.)

But there you have it. Assuming all things are equal — that both teams are organized and coached well* — I take that group of freshmen in a heartbeat. The one mismatch would be Hansbrough on Beasley/Love; I would make Love bang with Hansbrough and have Beasley try subvert Hibbert’s size with athleticism, but that’s still a tough go. The big mismatch, the one that goes in the freshmen’s favor, is the guard play. I love Collison and Neitzel and especially Lofton … but any Rose/Gordon backcourt is not one I’ll pick against any day. Too athletic, too strong, too naturally talented and refined.

So, like I asked, settle a fun argument, ITH-ers. Who do you think wins this one, and why?

*Please, no arguments saying the freshmen would play like the McDonald’s game. Assume that they care, and that they’re coached by some strict taskmaster. Coach K, or something.