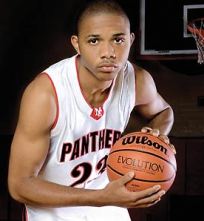 Even with the realization that we’re around 80 days from Midnight Madness tipping off across the Big 10, it’s never too early to start talking about the year to come.

As the countdown to October 12 (yes, I’m already counting) continues, Inside the Hall will break down the conference piece-by-piece each week.

Our first stop on the countdown to October is breaking down the top five newcomers to watch in 2007-2008. Here are the names, in no particular order:

Harris is the type of player who will thrive under new head coach John Beilein’s style of play. An aggressive offensive player who loves to make things happen, Harris can score the ball with the best of them. He’s got a knack for making tough shots when they count the most. He was Mr. Basketball in the state of this past season, beating out the likes of Durrell Summers, Darquavis Tucker and Kalin Lucas. If the Wolverines are to find themselves back in the NCAA tournament, Harris will be front and center in leading the charge.

Gordon is a scoring machine who can attack the basket and get to the foul line or burn you from beyond the three-point arc. His range is truly unlimited. Ranked by some analysts as the top player nationally in the class of 2007, Gordon was both a McDonald’s All-American and a Jordan Brand All-Star. Projected to slot in immediately as a do-it-all guard for the Hoosiers, Gordon will likely be a frontrunner for Big 10 Player of the Year.

Under the tutelage of former East Chicago Central coach Pete Trgovich, developed into an all-around leader on the floor. It all came together in March when he led his team to the 4A state championship, knocking off Gordon and Indianapolis North Central. An intelligent player who has a genuine feel for the game, can bury the three, defend and handle the ball. Expect him to be the top contributor amongst the stacked recruiting class coach Matt Painter is bringing to .

As quick as they come in the class of 2007, Lucas loves to penetrate and get others involved. And even better for Lucas, he’ll have plenty of weapons to choose from. Look for him to immediately battle incumbent point guard Travis Walton for playing time. He’ll fit in perfectly with Tom Izzo’s desire to push the ball up the floor and should be a four-year standout for the Spartans.

The departure of Greg Oden to the NBA opens immediate minutes for Koufos and he’ll take full advantage of the opportunity. Not your prototypical 7-footer, Koufos can run the floor and hit the mid-range jump shot. Possessing an array of offensive moves, Koufos is said to be nearly unstoppable from 15 feet in. He’s an unselfish player who prides himself on positioning while playing defense and excellent footwork on offense.