Indiana lacks the effort, trust and attention to detail to stay competitive in Big Ten play 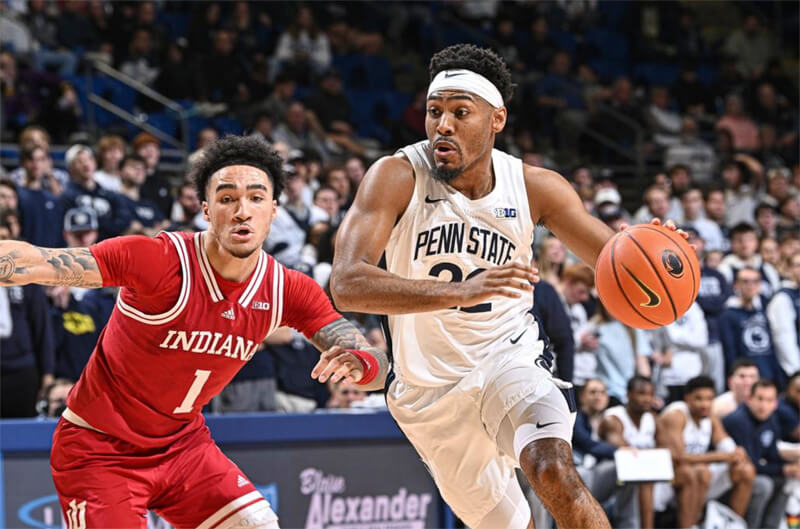 Trey Galloway slouched over, put his hands on his head and appeared to be in disbelief after a Kanye Clary 3-pointer with 11:30 to give the Nittany Lions an 11-point lead over the Hoosiers. From there, there was no going back.

In Indiana’s 85-66 loss to Penn State in Happy Valley (IU’s largest defeat to Penn State in school history), the Nittany Lions made 18 shots from beyond the arc on 31 attempts. Looking at that statistic blindly might make it seem like Penn State was just shooting the lights out. And while that is partly true, Indiana’s perimeter defense failed to make adjustments, overhelped on countless occasions and never communicated against a Penn State team that ranks top 10 in the country in 3-point shooting.

In a troubling performance on a multitude of levels for Indiana, the Hoosiers looked like they hadn’t even gotten off the plane. It was the first time Indiana had allowed 80 points in three straight Big Ten games since the 1997-98 season.

The step Indiana has taken back defensively from last season to now is almost shocking. According to Kenpom, the Hoosiers statistically had the best defense in the Big Ten last season. This year, the Hoosiers are 13th ranked only ahead of Minnesota. The crazy thing? Well, this year’s roster (on paper and without injuries) is better than last year’s by a long way.

Anyone who watched the Hoosiers this year and last would say IU can be a stellar defensive team. The key word there is capability. Over the first two months of this season and especially in Big Ten play, the defensive effort has been abysmal.

“I thought there were a couple of times we did things that we never even talked about doing in our scout, our walkthrough, our practice…tonight we had no shot with all the 3s that we gave up. We never touched anybody physically man, we just didn’t,” Mike Woodson said postgame.

Indiana lacked consistent ball pressure, communication and attention to detail. Indiana players kept turning their heads to find their man wide open, behind them or even on the opposite end of the floor. The better team, Penn State, took advantage.

So whether the game plan was discussed in the walkthrough or talked about in team meetings is irrelevant. When it mattered, it wasn’t executed. That’s the product fans and alumni are seeing on the court this season. A team that defensively looks lost and underprepared.

Stellar defense requires cohesiveness, energy and trust. In this context, trust is defined as knowing your teammate has your back on rotations and help defense and that the coach’s game plan will set you up for success. And a trust that your teammates will communicate, call out screens, motions and such. Right now Indiana doesn’t have this trust.

Hoosiers guards Tamar Bates and Jalen Hood-Schifino have struggled to pressure the ball and stick with quicker players. Miller Kopp doesn’t have the speed to chase around screens and close out on shooters. Galloway gambles for steals and gets caught out of position frequently.

“We gotta be mentally sharp as well as play hard. I just think when they get smacked around a little bit, we kinda shrink,” Mike Woodson said postgame. “If there was one rotation, we didn’t make the next rotation. We looked lost and again that’s on me.”

The little mistakes like turning it over with sloppy passes, missing free throws (IU shot 56 percent on Wednesday) and the defensive struggles are indicative of a team missing attention to detail and focus.

The lack of effort has been the most disappointing thing over the three-game skid. There just isn’t a whole lot of it. Even with the injuries to Xavier Johnson and Race Thompson, Indiana should still be competitive. That wasn’t the case at the Bryce Jordan Center.

“We can definitely play harder. Coaches are preaching it,” Galloway said postgame. “I think our identity is playing hard and I think we’re not doing that right now. And that’s all of us, we could all give a little more.”

For a team ranked in the top 10 just a month and a half ago, the fall Indiana has taken is perplexing. And right now there’s nothing external that will get the Hoosiers back on track. It’ll have to come from effort, coaching, will and trust. So far, the message of toughness and focus isn’t getting through.