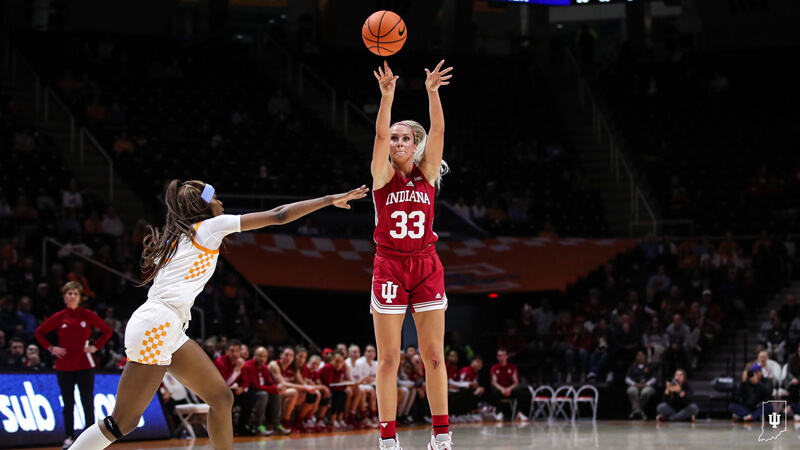 Indiana has proven to be one of the top teams in women’s college basketball this season, and conference play has barely begun. The Hoosiers have stayed put at No. 3 in the USA TODAY/WBCA Coaches Poll and No. 4 in the AP poll for the entire month of December, and don’t intend to drop anytime soon.

Those rankings are among the highest in program history, and for good reason — the 2022-23 Indiana team is one unlike any in recent years, seemingly poised to have a memorable, and perhaps even historic, season.

The Hoosiers enter official Big Ten play undefeated, with a record of 12-0 for the best start under head coach Teri Moren, in her ninth year with the program. It marks the most successful start to a season since 2013-14, when the team went 14-0.

Grace Berger’s injury and what it means

Grace Berger suffered a knee injury on November 25 during Indiana’s game against Auburn and has not returned to action, with no clear timetable on her status. However, her absence has highlighted two major things about the Hoosiers, with the first being they can win without her. Obviously.

The second? With Berger, the team is primed to be even more of a threat than they already are. And they’re the No. 4 in the nation.

Berger has been an integral part of Indiana’s team for years, and that hasn’t changed. Named to multiple preseason watchlists, the guard was — and still is — expected to play a vital role in Indiana’s success. But one of the questions entering the season was whether or not players besides Berger and Mackenzie Holmes could grow and step into roles that needed to be filled.

With Berger sidelined, other players have been able to prove they are capable of just that. Sydney Parrish was moved to the starting five. Lilly Meister, Henna Sandvik and Lexus Bargesser are seeing more time on the floor. All four, and others, have found their footing and shown they can compete, which is just what Indiana needed.

There’s no doubt that without Berger, the Hoosiers are without one of their top performers. But the most favorable outcome came to be; Indiana showed it is much deeper than its starting five and has the talent to support its postseason hopes.

In each of the six games she’s started in, Sydney Parrish has scored in double figures. Averaging 12.3 points and 6.2 rebounds per game, Parrish sits only behind Mackenzie Holmes on the stat sheet.

Even before moving to the starting five, Parrish was instrumental off the bench, playing what most would consider starter’s minutes and contributing just like one. Her style of play allows her to be present on both ends of the court in almost every play and, at 6-foot-2, her aggressiveness allows her to win many of the matchups she faces.

Holmes, the only Hoosier to outscore and out-rebound Parrish with 19.9 points and 7.1 rebounds per game, has done everything expected of her and more. She was praised as one of Indiana’s leaders from the beginning of the season, and her propensity to be present and score around the rim has allowed her to be just that.

Both Parrish and Holmes are averaging just under 30 minutes per game. Thanks to Indiana’s depth, the two can take a few minutes of rest and return to the floor to consistently play at a very high level.

Yarden Garzon is leading the freshmen, but others aren’t so far behind

When she arrived on campus, Yarden Garzon was making waves in the Indiana women’s basketball program. A standout in Israel, Garzon brought all of her experience and skill to the Hoosiers. As an immediate starter, she answered the call with very little trouble and has scored in double figures in all but five games.

Garzon is a highly skilled defender, scorer, passer and ball-handler. She can do just about anything necessary and has added a great amount of maturity and reliability to the Hoosier lineup. And while she is the most prominent freshman, other newcomers have also come into their own and are proving themselves.

Meister, Sandvik and Bargesser all saw an increase in minutes as the non-conference schedule continued, and the expectation is that they will continue to perform in conference play. The three freshmen aren’t coming in and scoring in double figures in every game, but all three are capable of shooting, getting to the basket and making an impact, whether it shows up on the final stat sheet or not.

As Big Ten play gets underway, Indiana will need players to come off the bench and consistently perform at a high level. All of the freshmen have that ability.

At first glance, Indiana’s non-conference schedule wasn’t very challenging. Beyond their undefeated record, the Hoosiers took down their two ranked opponents, Tennessee and UNC, handily. The two Big Ten opponents they have already faced brought two of their most challenging games, but the Hoosiers pushed through for wins.

Indiana has always been a program known for its determination and dedication. But this season, there seems to be another layer. The way that Indiana has been able to fight back against scoring droughts and deficits was all-encompassing; whether it was one player who took on the brunt of the work or everyone stepped up their game — or both, at times — there was always more left in the tank for the team to tap into.

The same couldn’t always be said in the past, with a glaring lack of bench depth and reliance on starters to play, and perform, for every single game. This season, with more players coming in more consistently, the way the Hoosiers play has changed. There are more plays to run with different contributors, more off-ball movement with more threats on the court, and a greater sense of a well-rounded, fully capable team.

Indiana’s talent was never the main question entering the season. The biggest unknowns were what injuries could mean and whether or not the chemistry and winning mentality would carry over into a relatively new team. Thanks to Indiana’s non-conference schedule, all of those questions were answered.

The real tests begin now, with only Big Ten teams remaining on the schedule. Big Ten basketball is full of surprises, and no team can be discounted. But Indiana, as one of the top teams in the conference, has shown it has a very good chance to continue to stand out on a national level and make a real push for the Big Ten title.