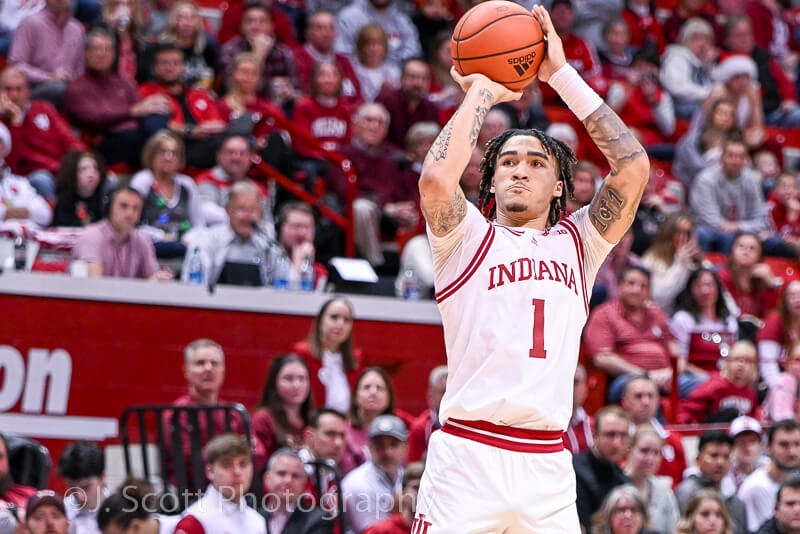 Indiana wrapped up its non-conference schedule on Friday night with a 69-55 win against Kennesaw State at Assembly Hall.

Another slow start causes Indiana to play from behind

It’s become a commonality to say that Indiana starts games slowly. For most of the first half on Friday, the Hoosiers were down. It was just a lackadaisical showing.

The Hoosiers allowed Kennesaw State’s first five baskets to be 3s; from then, Indiana had to crawl back into the game. The contest was tied at halftime and Indiana didn’t take control of the game till under the eight-minute mark in the second half.

Slow starts have plagued Indiana recently, particularly since the Big Ten opener against Rutgers. At Arizona, IU was down 19 in the first half. Against Kansas, IU fell behind double figures in the first six minutes. Even earlier this week against a bad Elon team, Indiana took the first 10 minutes to get comfortable.

Maybe on Friday it was the negative-degree weather or the fact it’s two days before Christmas. Whatever the reason, it was an unmoving and uninspired start. The 13-day break until Indiana officially starts Big Ten play at Iowa seems to be much needed.

“I thought they played harder (in the second half) than we did the first half,” Mike Woodson said postgame.

Tamar Bates pushes to be an offensive focal point

With Xavier Johnson and Trayce Jackson-Davis out against the Owls, the question of where the offense would come from arose. Tamar Bates answered.

The sophomore led Indiana in scoring with 19 points on an efficient 7-of-12 shooting. Bates made three 3-pointers on Friday. On the season, the Kansas City native is shooting 52 percent from the field and a scorching 42 percent from deep.

It was clear that Bates was the most talented on the floor against Kennesaw State. And Indiana needed him to be. Without Johnson and Jackson-Davis there aren’t many guys on the Hoosiers roster who can single-handedly create offense. Bates can do that. He can score on all three levels and is becoming a vocal leader, calling teammates into huddles and being the first to cheer them on.

“Tamar is starting to figure it out…his minutes now are going to increase, because we’re gonna need him to step up and play and make plays for us,” Woodson said.

Over the last five games, Bates is averaging 25.2 minutes per contest. And now with Johnson out indefinitely, Bates will need to become a creator for an otherwise stagnant Hoosiers offense.

Indiana’s offense has no direction without Jackson-Davis and Johnson

At times, especially in the first half, it was almost as if the Hoosiers’ shoes were glued to the court. Minimal movement and pace forced Indiana’s offense to become one-dimensional. Continuous dump-downs into the post led to double teams, turnovers and limited second-chance points. This time it was obvious that Indiana didn’t have the crutch of TJD and Johnson to lean on.

It wasn’t until the second half when Indiana went small, that things started to flow. Moving Thompson to the five and having him play on the perimeter allowed the paint to be open and unclogged. Finally, guards like Jalen Hood-Schifino could drive to the paint without worrying about help defense.

It also helped that Indiana shot 7-of-18 (39 percent) from beyond the arc against the Owls.

The type of offense with or without Jackson-Davis might be what the Hoosiers turn to if the swarming post-double teams keep coming at their big men.

Similarly, as he did in his first game starting at point guard against Elon, Jalen Hood-Schifino looked comfortable leading Indiana’s offense.

When Johnson got injured, all eyes turned to the true freshman to lead IU’s backcourt. He’s responded. For the second consecutive game, the Montverde product put up a career-high in points and shot the ball at a high clip. Against the Owls, he scored 18 on 6-of-8 shooting and tallied three assists and three turnovers.

While the turnovers need work, it’s also of note that Hood-Schifino got to the line for six attempts. Earlier on in the season, we’d see the point guard opt for pull-up jumpers in transition or off pick and rolls. But against Kennesaw State, Hood-Schifino was getting to the rack and it drew attention.

There’s no question that his play in the Big Ten will be crucial for Indiana’s success. But for now, he needs to keep doing the little things well and his teammates will follow. Get to the foul line, feed the rock, open the floor and get up and down in transition.

Non-conference play is over, now the real season starts

This year’s non-conference slate tested Indiana. This group is banged up, but a 10-3 record with wins over North Carolina and Xavier heading into January is a solid showing overall.

The problem, however, is the way it’s happened. The losses to Arizona and Kansas were supposed to be hard-fought and close games, and they weren’t. They were games where Indiana didn’t show up.

But the best part about these games for the Hoosiers is that they were tested. They know what will fly and what won’t against top competition. Woodson’s squad didn’t have that last year.

Slow starts and the one-dimensional offense won’t work once conference play begins. A healthy Jackson-Davis will be necessary if Indiana wants to live up to the preseason conference favorites hype.