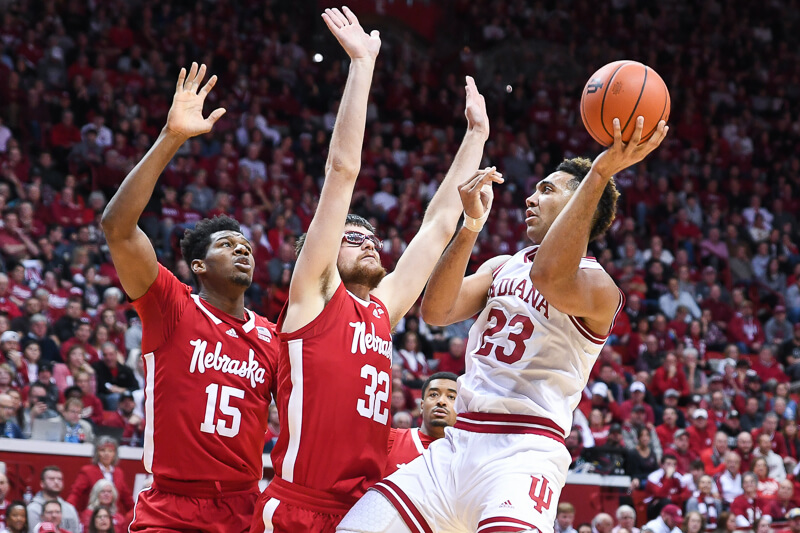 Indiana improved to 8-1 overall and 1-1 in Big Ten play with a comfortable 81-65 victory against Nebraska on Wednesday at Assembly Hall.

Here are five takeaways from the win against the Cornhuskers:

One of the statistical storylines entering Wednesday’s game was whether Trayce Jackson-Davis could vault past Christian Watford, Kent Benson and Damon Bailey on the all-time scoring list at Indiana.

Jackson-Davis entered the game with 1,716 points and needed 26 points to pass all three players and claim the No. 8 spot on the list.

But Jackson-Davis still found a way to make history.

The lefty All-American recorded just the third triple-double in program history. The feat had only been accomplished previously by Steve Downing in 1971 and Juwan Morgan in 2018.

Finishing with double-figure points and rebounds is common for Jackson-Davis over his career in Bloomington. The assists, however, reached double-figures for the first time in his career.

Hoosiers get hot from the perimeter

After connecting on only six of 25 shots from distance in Saturday’s loss at Rutgers, Indiana found its range against the Cornhuskers.

Through nine games, Indiana is shooting 35.9 percent on 3s, ranking in the top 100 nationally.

Mike Woodson has been steadfast in his comments that there isn’t any major adjustment to make when teams pressure Jackson-Davis in the post. According to Woodson, Indiana has to make open looks to make opponents pay for double-teaming Jackson-Davis. On Wednesday, Indiana did just that.

A tough night for Xavier Johnson

Xavier Johnson is one of Indiana’s most important players for various reasons. He’s an excellent on-ball defender, can get into the lane and finish, is a very solid distributor and can also make open 3-pointers.

Wednesday, however, was a tough night for Johnson.

Johnson has now struggled in back-to-back games without Jalen Hood-Schifino in the Indiana lineup.

Moving forward, Indiana will need the type of performance it got from Johnson down the stretch of last season rather than what transpired on Wednesday. Indiana’s next two games are against top-tier opponents away from Assembly Hall. And with the status of Hood-Schifino still uncertain, solid play from its most senior ball handler is essential for the Hoosiers.

IU continues to win with defense

Through nine games, just one opponent has cracked the one-point-per-possession mark against Indiana.

That distinction goes to Xavier, which Indiana beat 81-79 back on Nov. 18 in Cincinnati.

The Hoosiers held another opponent down on Wednesday as Nebraska scored only .906 points per trip on Branch McCracken Court.

The season is still young, but Indiana’s defense is again outpacing its offense.

In KenPom’s adjusted defensive efficiency rankings, Indiana is 11th nationally as of Thursday morning. Among Big Ten teams, Indiana is second defensively behind Rutgers, which dealt the program its only loss thus far last weekend.

Nebraska competes despite the absence of Sam Griesel

The momentum, however, took a hit in the pregame when it was announced that Sam Griesel was out with an illness. Griesel, a transfer from North Dakota State, is Nebraska’s second-leading scorer.

The fact that Nebraska was still competitive at times on the road against one of the Big Ten’s best teams speaks to the quality and depth of the league so far this season.

The Cornhuskers were a consensus pick to finish in one of the bottom spots in the conference, which may very well come to fruition.

But their competitiveness and improvement as a team compared to last season reinforces the fact that there are no easy nights in the Big Ten.