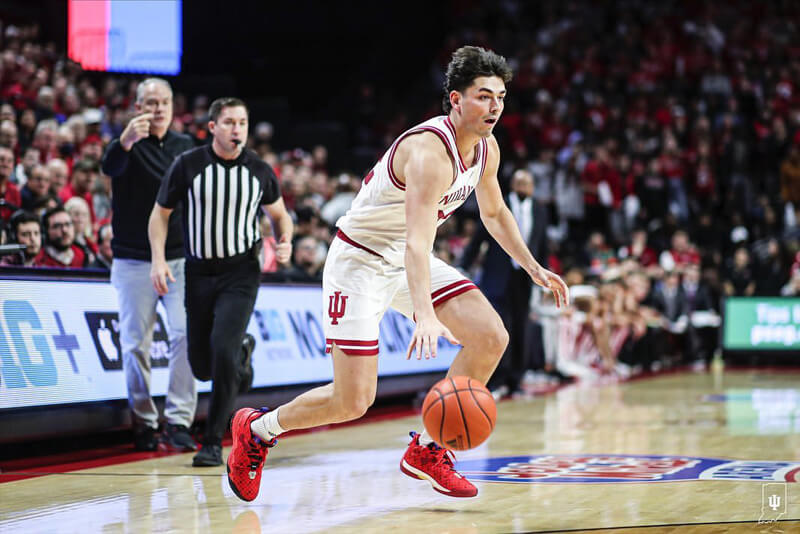 The history behind Indiana and Rutgers basketball set up the Big Ten opener to be a game rife with tension, chippiness and high-energy plays. And while that was the case, it was the opposite of what the Hoosiers needed.

IU’s 63-48 loss to the Scarlet Knights featured a team almost incapable of making shots or finding any consistent positive energy. Outmatched in aggression and style of play, Indiana finished shooting 17-of-56 from the field, with only six 3-pointers on 25 attempts.

The Hoosiers, typically stoic and composed in the post, were out-rebounded 47-33. They allowed 17 offensive rebounds to only nine of their own.

“We just got out-toughed tonight,” Mike Woodson said postgame. “From the beginning to the end. We couldn’t rebound the basketball. I thought that was the difference in the ball game.”

Miller Kopp was one of the few positives for Indiana, as he finished with a season-high 21 points and five 3-pointers. But when none of his other teammates could buy a bucket for most of the night, even Kopp’s cleanest 3-pointers couldn’t save the game.

“We just couldn’t throw it in the ocean,” Woodson said.

Hesitation to take shots or play with anything more than a lackadaisical mindset led to the Hoosiers beating themselves. But make no mistake, the Rutgers defense certainly played a part.

The Scarlet Knights’ game plan around the basket was clear: stop Trayce Jackson-Davis. It worked.

Jackson-Davis finished with 13 points but struggled around the rim throughout the game. Amid double and triple-teams, Jackson-Davis watched more of his layups bounce off the rim than fall through the net. He recorded yet another double-double with 10 rebounds, but wasn’t his usual self.

However, that wasn’t the ultimate factor behind Indiana’s offensive woes.

In previous games this season, the Hoosiers showed they didn’t need Jackson-Davis to be successful. Of course, the All-American brings an edge that can’t be denied, but Indiana isn’t without other scorers.

Malik Reneau, Race Thompson, Xavier Johnson and Jalen Hood-Schifino have all shown out in various moments in the past, able to bring new energy and change the rhythm of the game. Trey Galloway, making his first start of the season, had the chance to capitalize on the momentum from his performance against UNC on Wednesday.

But against Rutgers, most of the energy they brought was negative.

“We need everybody playing,” Woodson said. “Especially when we get out on the road. The road is tough to win.”

Thompson, unable to score, didn’t perform with his usual intensity and only played for 17 minutes. Coming off the bench for a struggling Thompson, Reneau quickly reached four fouls and had to return to his seat. Johnson scored eight points and also encountered foul trouble that threw off his game.

With the absence of Hood-Schifino, who sat out due to lower back tightness, Indiana was without a vital piece of its offense in terms of scoring and grit. Hood-Schifino usually brings a calmness to the floor and can stay cool under fire, two things the Hoosiers sorely needed against the Scarlet Knights.

But at the end of the day, even his presence may not have changed the overall outcome. Rutgers simply played better than Indiana.

There was a clear lack of fight in Indiana on Saturday night, with few players willing to drive in hard for rebounds or compete with the Rutgers big men.

“It takes effort to block out and rebound the basketball,” Woodson said. “We just didn’t do that tonight.”

Frustrations, while present throughout the game, became exceedingly clear in the second half when Miller Kopp had a heated exchange with Jordan Geronimo following a scuffle between the 10 players on the court.

It wasn’t the first time the two teams got physical, and it wasn’t the last. Fouls, called and uncalled, only contributed to the tension. By the end of the game, Indiana’s frustration was palpable — even through the television.

Jackson-Davis fouled out of the game with less than two minutes remaining. It was the first time in his college career that he fouled out of a game, perfectly encapsulating the feeling surrounding the game.

There were very few moments, if any, where Indiana seemed confident. Following a statement win over No. 18 UNC, hopes were high. The key for the Hoosiers now is to move on, and hope their upcoming opponents won’t watch the film of Saturday’s game too closely.