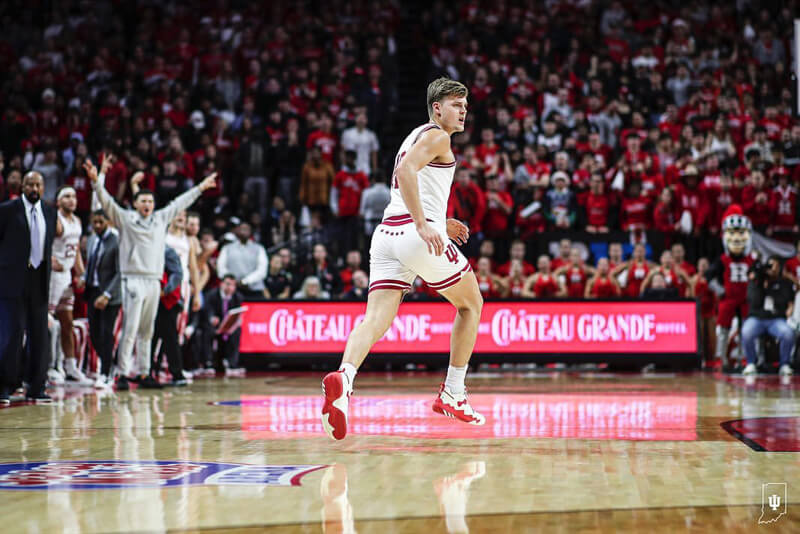 Indiana suffered its first loss of the season at Rutgers 63-48 on Saturday at Jersey Mike’s Arena.

Beating the Scarlet Knights has been a challenge for Indiana over the years. Entering Saturday’s matchup, Indiana was 1-7 against Rutgers over the last eight matchups. And it’s been even harder for Indiana to beat Rutgers in Piscataway. The Hoosiers haven’t left Jersey Mike’s Arena with a win since February 2018.

It can be difficult to grasp that statistic. For most of Rutgers’ history as a program, it has served as a punching bag. But, head coach Steve Pikiell has the program headed in a different direction as he searches for the team’s third consecutive NCAA tournament berth. The Scarlet Knights are no longer a punching bag. The program is formidable and consistently competes in the Big Ten.

That’s something that Indiana has failed to realize. There was a lot of chatter from Trayce Jackson-Davis and other IU players about how they haven’t beaten Rutgers in New Jersey during their college careers. That looks like it will stand. We know it will for Jackson-Davis, who won’t get another chance unless he shocks college basketball and returns for a fifth season.

Maybe it’s the blue-collar attitude and underdog mentality that has Rutgers soaring. Or the coaching. Or the big-time performances from guys like Ron Harper Jr., who single-handedly ended Indiana’s senior night last season. Whatever it is, Indiana just can’t figure it out.

Miller Kopp was the best Hoosier on the floor on Saturday afternoon.

The fifth-year senior finished with 21 points on 8-for-12 shooting from the field while hitting five 3s. It was the kind of performance fans expected of him after he transferred from Northwestern a year and a half ago. But that was that. If you exclude Kopp, who is shooting 53 percent from beyond the arc this season, Indiana shot 1-for-16 on 3s.

An abysmal display but not a surprising one. No one has stepped up to match or even come close to Kopp’s efficiency. That’s been the story through the Hoosiers’ first eight games. There have been flashes from players like Tamar Bates, who shot the ball at a high clip in Indiana’s win over Jackson State. But Kopp has been the only consistent one.

This won’t work in Big Ten play and it didn’t work against Rutgers. Bates, Xavier Johnson and Race Thompson combined to shoot 3-for-22 from the field on Saturday.

It was announced before tip-off that Jalen Hood-Schifino would miss his first Big Ten game with back soreness.

There isn’t much reason to have concern for the freshman’s health, but not having him on the floor made a difference. It’s been apparent how having a secondary ball handler in the lineup helps Indiana spread the ball, space the floor and take a load off Xavier Johnson.

Johnson felt that load against the Scarlet Knights. At times, the fifth-year senior looked uncomfortable, rattled and out of control. Johnson finished the contest shooting 2-for-11 from the field, with four fouls and six turnovers in 34 minutes.

He just looked like he was pressing the whole game and trying to make a play when the play wasn’t there. Hood-Schifno allows ‘X’ to have some freedom, play off the ball more and take a breather. Johnson didn’t have that luxury and it made a difference.

Hood-Schifino’s gifted poise, composure and patience were needed in Piscataway.

Indiana was out-rebounded and Rutgers was the tougher team

The Hoosiers gave up a ridiculous 17 offensive rebounds to Rutgers which led to 17 second-chance points. That was a major difference in the game.

Rebounding is one of those things that is mainly effort and attention to detail. Indiana failed to do that as the Scarlet Knight out-rebounded the Hoosiers by 14.

“It takes effort to block out and rebound the basketball and we just didn’t do that tonight,” Woodson said. “That’s an area that we gotta get better as a team.”

In particular, Woodson mentioned how Indiana’s guards struggled to box out and finish the job on the glass. There were multiple occasions where Rutgers’ guards crashed the glass and ran around their defender to get the board.

The physicality of Rutgers was a problem for Indiana. The Hoosiers struggled to get the 50-50 balls and deal with the defensive pressure.

We saw how dominant TJD can be in the win over North Carolina on Wednesday. But against Rutgers, he shot 5-for-11 from the field and 3-for-6 from the foul line. The All-American fouled out for the first time in his career and turned the ball over four times.

When he would get the ball in the post, an immediate double-team would come and it led to turnovers. Jackson-Davis had been so good so far this season at passing out of the double-team but on Saturday he looked uncomfortable.

In Saturday’s loss, the rest of the Hoosiers failed to create space and come to the ball. Guys were standing still and waiting for someone to make a play. It was a recipe for disaster as Indiana’s 48 points are the lowest amount a Mike Woodson team has scored.

Despite finishing with a double-double, it was an ugly performance for Jackson-Davis. The rest of Indiana’s offense followed.