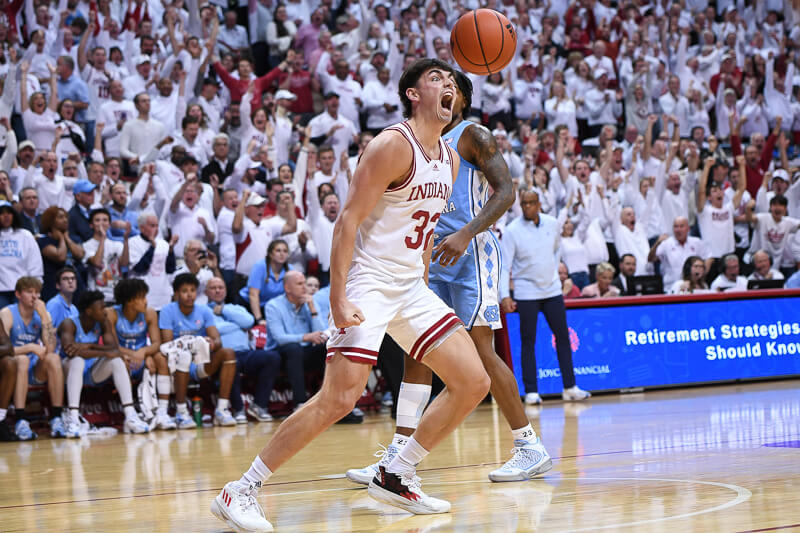 Students began lining up outside Simon Skjodt Assembly over 24 hours before No. 10 Indiana basketball’s late-night tipoff against No. 18 UNC Wednesday night.

Not allowed to have tents, they endured pouring rain, sub-freezing temperatures and gusts of wind so strong they brought tears to the eyes of anyone outside. But by the time those fans finally reached the warmth of Assembly Hall, they had regained any energy they lost — and then some.

“I want to thank the fans who slept overnight in the cold and rain just to be here today,” Mike Woodson said postgame. “Boy, that means a great deal to our players and our program. Our fan base is phenomenal.”

Even an hour before tipoff, the student section was almost filled and buzzing with excitement. Other members of the Hoosier fan base filled the hall as tipoff approached, resulting in a sea of white ready and waiting for Indiana to take the floor.

And when they did, the cheers were comparable to those from Mike Woodson’s first appearance as Indiana’s head coach, and Indiana’s last home game against Purdue. Boos rained down over Armando Bacot and the rest of the Tar Heels from the moment they stepped on the floor during warmups.

Those cheers and taunts continued throughout the entire night, with smatterings of “overrated” coming when Bacot stood at the charity stripe. The referees drew some of the greatest ire from the fans, with many calls questioned by almost everyone watching.

But the biggest sounds of the night came, unsurprisingly, when Indiana succeeded.

When the final buzzer sounded and the Hoosiers pulled out their 77-65 victory, Assembly Hall had already erupted countless times — but the fans had one more in them, cheering as loud as they could for the 7-0 Hoosiers.

Most of those explosions of noise, one of which reached 125 decibels, came on big shots or slam dunks from various Indiana players. The one who received some of the biggest? Trey Galloway.

Galloway, in his return after a minor stint in a suit on the bench after injuring his knee against Xavier, finished the night with a season-high 11 points on 5-for-7 shooting. On a team where there are many options for a spark off the bench, Galloway brought the flame.

Galloway was a workhorse on the boards, pulling down three rebounds and posing a defensive threat to almost every UNC player. In bringing the flame off the bench, he sometimes played like his pants were on fire.

Galloway was one of the Indiana defenders who matched up against UNC’s Caleb Love, who, before Wednesday night, was averaging 19.1 points per game. Against Indiana, he scored 13 points while shooting 5-for-16 from the field.

While Galloway’s defensive efforts also induced some of the best plays of the night, and contributed to Indiana’s impressive defense as a whole, it was his offense and celebrations that brought the thunderous roars.

Back-to-back buckets from Galloway in the form of a fastbreak layup and a fastbreak dunk in the first half brought Assembly Hall to a true fever pitch for the first time of the season. It also gave Indiana its largest lead of the game at the time at eight points.

Fueled by Galloway’s yells and emphatic chest pounding, only a few souls in powder blue failed to contribute to the madness that occurred in the timeout following. And Galloway was just getting started.

“I thought Galloway was phenomenal, the way he played based on the fact that he hadn’t practiced in 10, 11 days,” Woodson said. “It was nice to have him back.”

The Hoosier faithful certainly felt the same way, shouting their admiration from the back of the balcony, even as statistics were read out after the final buzzer.

Woodson has sung Galloway’s praises multiple times already this season, citing his improvements in every aspect of his game. Against UNC, where all of Indiana had something to prove, Galloway truly showed his improved skills in a top-tier matchup.

“He’s a big piece to the puzzle,” Woodson said on his radio show with Don Fischer. “He’s made a major turn based on where he was last season.”

Galloway will likely still have to compete hard with other bench players for minutes going forward. That’s a storyline that won’t go away this season. But if he can produce like he did Wednesday, and use the crowd to his advantage, he — and the rest of Indiana basketball — will be set up well for success.