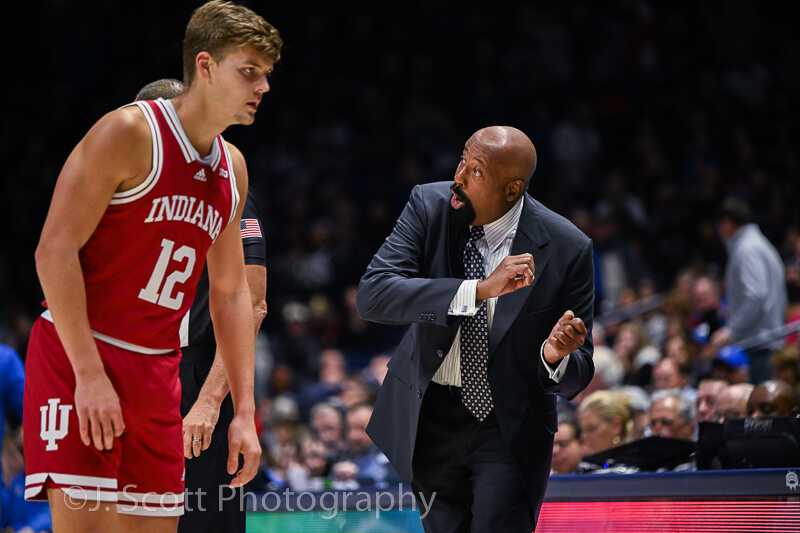 “Inside Indiana Basketball with Mike Woodson” returned the night after Indiana’s 30-point win over Miami (OH) as Woodson sat down with the voice of the Hoosiers, Don Fischer.

One of Indiana’s graduate managers, Adam Howard, joined Fischer for the final segment of the show.

• Woodson said Trayce Jackson-Davis “refused to let [Indiana] lose” to Xavier. He cited Jackson-Davis’ work rebounding and bringing the ball up the floor and his plays around the basket.

• On Xavier Johnson’s 23-point game against Xavier: “He’s grown so much over the year that we’ve had him…he’s gotten so much better…he finally had the breakout game against Xavier which is something that you need when you’re playing a big-time team like that. I thought he did all the necessary things to help us win the game.”

• After a few technical fouls against Xavier, Woodson said he’s focused on eliminating “foolishness” from the team.

• Indiana is set to play No. 1 UNC on November 30th, but Woodson said he’s “not even thinking about North Carolina right now,” with two games to get through before the matchup.

• On roles among the team: “I think we’re still learning. I know as the coach, I’m still learning rotations and combinations that work well together.”

• On the bench: “They’re very competitive. They love playing basketball and they’ve been — so far this season — they’ve been great for our team.”

• Trey Galloway sat out against Miami (OH), and Woodson said they are still “taking it easy” until they fully evaluate his knee — Woodson said he hurt it during the game against Xavier.

• On Trey Galloway’s growth from last season: “He’s a big piece to the puzzle. He’s made a major turn based on where he was last season…the kid plays so hard.”

• On Malik Reneau: “He’s a talented young player that’s physically fit to play basketball. His body is unbelievable, and he loves playing, and he loves to learn…and I just can’t help but think if he continues to work and grow, we’ll all benefit from it.”

• Woodson said he is very pleased with the team’s ball-handling and turnover rate, citing that as a big part of having a good offense. Indiana is averaging 11.3 turnovers per game.

• On three-point shooting: “We’re shooting 36% as a team right now. That’s pretty good compared to where we were last season. We couldn’t throw it in the ocean last season.”

• Woodson said he’s confident the team will make its three-pointers. He cited Miller Kopp coming up with shots in important moments, saying it shows a lot about how Kopp isn’t afraid to “pull the trigger” when he has open shots.

• Woodson was concerned with how the freshmen would handle the environment at Xavier but said he thought they handled it pretty well.

• On Jalen Hood-Schifino and Malik Reneau: “They still have a long way to go. College basketball is a grind…it’s my job to make sure that when they’re down, I have to lift them up and get them ready to go.”

• On analytics and statistics: “I’m not against analytics, [but] the main stat is do you win?”.

• Woodson said the statistics he looks at after games are defensive field goals, rebounding and assist totals.

• On coaching by “feel”: “I’ve always coached that way, and the players make it easy for you…you find the next guy and see if he’s ready to play and give you what you want, and if he is, you ride him.”

• On playing four games in eight days: “The schedule was set up that way because it puts you in a tournament play atmosphere.”

• On Little Rock: “They’re an up-and-down team…we know they’re a team that likes to get the ball out and run, and they give up points.”

• Howard says the biggest difference he’s seen since Woodson came in as head coach is that the players enjoy coming in every day.