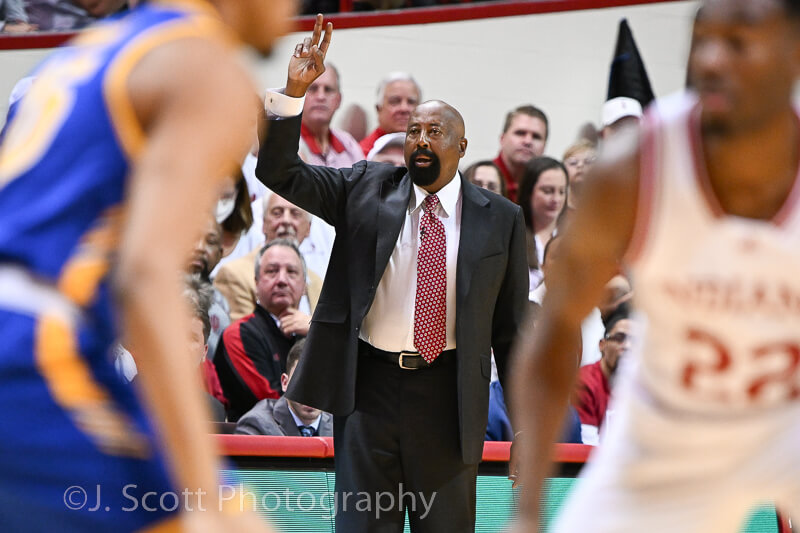 “Inside Indiana Basketball with Mike Woodson” returned after a week off as IU’s second-year coach sat down with the voice of the Hoosiers, Don Fischer.

Jordan Hulls, IU’s team and recruiting coordinator, joined Fischer in the final segment of the show.

• Woodson said the bench changed the dynamic of the first two games after both contests were competitive early on.

• Woodson noted that IU’s freshmen are still behind a little bit, but pointed out that their competitiveness has helped make up for it early on in the season

• On Reggie Theus, Woodson joked: “He cheats a lot in golf. I think sometimes he’s got holes in his pocket. He can’t find his ball and it appears where he thinks it is. We’ve got to keep an eye on him.”

• Woodson said IU was able to overwhelm Bethune-Cookman with its size, experience and athleticism.

• Fischer asked Woodson if IU can divulge what it pays opponents like Saint Francis, Marian and Bethune-Cookman to come to play in Bloomington. Woodson said he wasn’t able to. (Here are the numbers, via an open records request.)

• Woodson said he’s been most impressed with Indiana’s assists so far. He said that was a struggle last season and it shows guys are sacrificing for the team’s sake. “That becomes contagious.”

• On the bench production so far: “Those guys are hungry. They want to play. I can’t give everybody big minutes.”

• Woodson said coming into the season he played into his mind the rotation and who was going to play. “Based on how the game is going will determine how I rotate players in.”

• With the switching that IU does on defense, Woodson pointed out that it can put bigs out onto the perimeter and put IU at a disadvantage on the glass.

• On Miller Kopp: “He’s made a lot of shots. Especially in transition where you can’t get matched up.”

• On 3-point shooting: “When you’ve got open 3s, you’ve got to make them. Last year we struggled in that category.”

• On Trey Galloway: “He plays so hard, especially with the things we want done on the defensive end.” Woodson also said Galloway put in a lot of work on his perimeter shot in the offseason.

• On CJ Gunn’s fearlessness: “I was kind of that way as a freshman. We’ve just got to get him comfortable… I’m pleased with how CJ has played.”

• Woodson on allowing big guys to bring the ball up the floor: “I don’t want robots. I want basketball players that can make plays.”

• On Gabe Cupps: “He’s just a solid point guard that knows how to run a team. And he wins. He wins titles.”

• On Jakai Newton: “He’s tough. And he can really score the basketball.”

• Woodson says he’s still recruiting for next season. He says IU will lose Johnson, Jackson-Davis, Thompson and Kopp after this season.

• Woodson said he’ll be out recruiting on Tuesday in Florida at Montverde Academy.

• Woodson on Xavier: “Watching them on film, they really play extremely well together. They’ve got some veteran guys that have been around a while.”

• On approaching the first road game of the season: “I tell our players, the road is different. You’ve got to have a mentality on the road that you can’t turn the ball over, get good shots and you really gotta defend and rebound the ball.”

• Woodson said IU had officials into practice today and scrimmaged a little bit. IU will be off on Tuesday as Woodson is on the road recruiting and will “get back at it” on Wednesday in preparation for Xavier.

• Hulls says a big part of his job is underclassmen recruiting, building relationships and notes that he puts together schedules for official visits and unofficial visits is something he plays a big part in. Hulls played professionally in Poland, Kosovo, Belgium and Germany before returning to Bloomington.

• Hulls says he wouldn’t have come home for “anything but this job.” Notes that he likely would have played another two or three years or until his knees gave out.