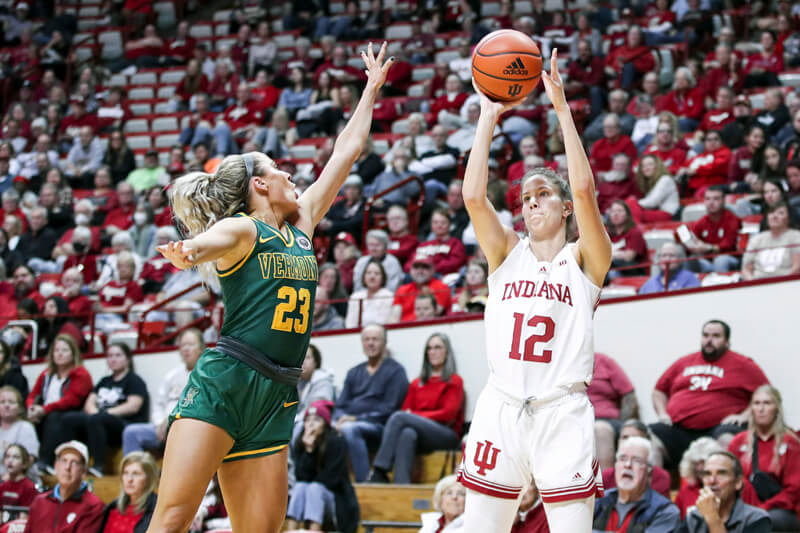 From the first time Teri Moren spoke to the media during the preseason, a few storylines for Indiana women’s basketball were made abundantly clear.

First, Indiana had talent and leadership returning. Second, the incoming transfers were ready to play, and play well. Third, the depth lacking last season is now on the roster. And fourth, Yarden Garzon is really, really good.

Indiana’s 86-49 win over the University of Vermont Tuesday night proved to everyone that Moren was right, and the Hoosiers are certainly capable of being one of the top teams in the country.

“I think what’s going to be special about this team is that it’s different than any team we’ve had so far,” Mackenzie Holmes said. “It’s exciting and I think that the pieces that we have this year, they’re versatile, they’re dynamic.”

And rounding out the starting five, with what would be one of the best debut performances by an Indiana freshman in recent history, was Yarden Garzon.

Garzon finished her first-ever collegiate game with a team-leading 19 points and five 3-pointers. It was the highest-scoring freshman debut since the 2013-14 season and the most for a freshman during Moren’s tenure.

“We kind of really quickly figured out how good she was,” Berger said. “She’s not a typical freshman. She plays like a pro out there.”

Garzon added four rebounds and four assists on the night, showing her ability to facilitate. She blended in with top players like Berger and Scalia, looking comfortable with her role in the season opener.

“I think within each game there’s going to be moments where she gets a lot of touches, (and) she’s the hot hand,” Moren said postgame.

As a team, the Hoosiers shot 12-of-25 from beyond the arc, to tie for the fifth-most made 3-pointers in a single game in school history. Scalia and Garzon were the most impactful from deep, as Scalia went 3-of-6 on the night.  Four other Hoosiers also attempted 3s, making it clear the roster knows how important it will be to get contributions from across the roster.

Four Hoosiers finished in double figures, and the team shot 49 percent overall. Berger, ever the all-around contributor, finished with 14 points, eight rebounds and eight assists. She also took on the point guard role for most of the game.

“Grace was Grace,” Moren said. “She is our leader. Just so even-keeled in every scenario out there, and gets people where we need them to be. And that’s something different that she’s never done in her career.”

Another part of a well-rounded team is, of course, depth off the bench. Last season, Moren wouldn’t typically use more than two or three substitutions in a game, instead rolling with her five starters for most of the minutes.

Before the season started, Moren said her team this year should have more depth. And with 13 Hoosiers seeing the court on Tuesday, it’s safe to say they do, and the bench will be called upon much more this season.

Key players off the bench included transfers Sydney Parrish, now back in her home state, and Alyssa Geary. Freshman Lilly Meister also began to make a name for herself, playing seven minutes and grabbing four rebounds.

Geary finished with four points, four rebounds and one steal in eight minutes on the floor. Parrish, who played the most out of any bench player at 22 minutes, scored eight points with four rebounds. She also recorded four steals, tying her career-high.

“What Syd has been doing off the bench is really good for us,” Moren said. “We did not have that a year ago, or two years ago.”

Moren praised Parrish’s ability to communicate, especially on the defensive side of play, and her tough and determined attitude.

Only one game into the season, there’s a long way to go, and Indiana certainly has areas to improve upon. But if this one game is any indication, the confident and versatile Hoosiers will be on the national radar throughout the season.